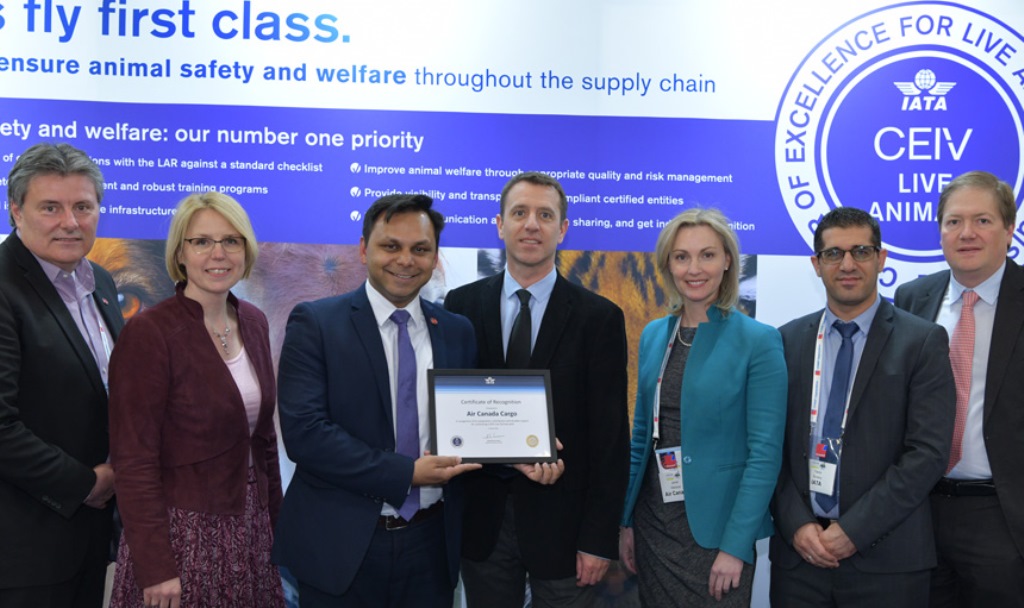 Air Canada Cargo has become the first airline to receive IATA’s new CEIV Live Animals certification.
The Montreal-based airline received the certificate today after successfully completing the pilot programme, which was launched in April.
“This certification reinforces that Air Canada Cargo is operating to the highest standards in the transport of live animals, be it exotic species or household pets,” the airline said.
The Live Animals certification is the second CEIV programme launched by the airline group, following on from Pharma.
Air Canada Cargo vice president Tim Strauss said: “Air Canada Cargo is a trusted carrier for thousands of animal shippers worldwide and has always complied with the IATA Live Animal Regulations.
“We expertly handle complex shipments, from rescued dogs, livestock, endangered animals travelling between zoos for conversation efforts and of course family pets.
“We are honoured to have been selected to participate in the CEIV Live Certification pilot and are proud of the team at Air Canada Cargo for achieving the industry’s first ever certification, which reinforces our position as an industry leader.”
IATA launched the new standard to improve the safety and welfare of animals travelling by air earlier this year.
Air Canada Cargo and London Heathrow Animal Reception Centre were chosen to undergo a pilot for the programme.
Over several weeks in May and June, as part of a thorough audit, IATA’s specialists reviewed Air Canada Cargo’s policies and procedures for transporting live animals.
All aspects of animal handling were included in the review, from booking to acceptance, customer service, training, physical handling, transport to and from the ramp and conditions in our Montreal facility, and consideration for animal safety and well-being.
Compliance with Canadian Border Services Agency (CBSA) was fully reviewed as was compliance with protocols like the Convention on International Trade in Endangered Species of Wild Fauna and Flora, whose aim is to deter illegal wildlife trade.
“I want to congratulate Air Canada for their great leadership in achieving the first CEIV Live Animals certification in the world,” said Nick Careen, IATA’s senior vice president, airport, passenger, cargo and security.
“Proper handling and transporting of live animals is a very important aspect of the cargo supply chain, with many unique complexities. Global standards and expertise are key to the safe and humane transportation by air of this precious cargo.”
As well as launching CEIV Live Animals, IATA is also considering launching a programme for perishable transport.
Read more animal transportation news
Sign up to receive Air Cargo News direct to your inbox for free