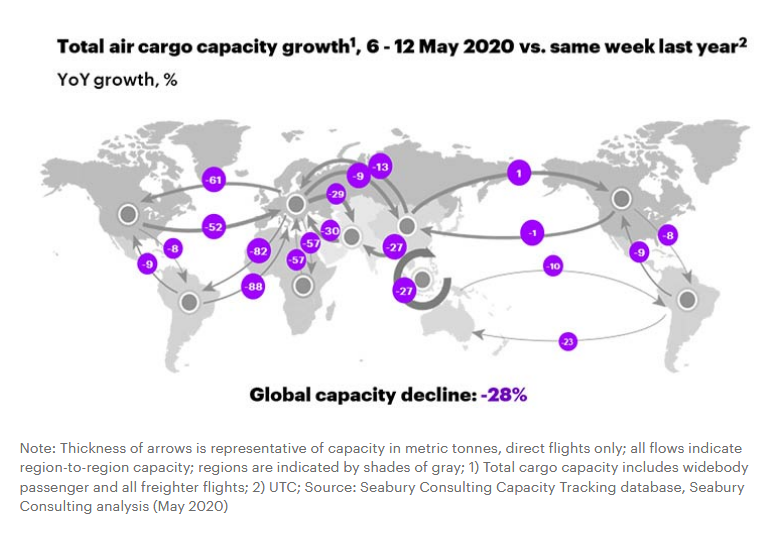 The gap between air cargo capacity in 2020 and last year has grown again as airport congestion has slowed freighter operations.

The latest data from Accenture’s Seabury Consulting shows that global air cargo capacity was last week 28% lower than a year ago. Last week the figure stood at 25%.

The decline comes as the passenger services that make up 45-50% of total cargo capacity have been axed due to the coronavirus outbreak.

The consultant said that the increase in China outbound freighter capacity is lower compared with previous weeks, mostly due to a 3% decline of capacity out of Pudong (PVG) and 58% out of Chongqing (CKG), while other key cargo airports in Asia showed strong capacity growth.

Forwarders have been reporting issues at Chongqing after a new rule was brought in that meant cargo could only arrive at an airport 28 hours before departure to stop cargo arriving too early and causing logjams and cargo missing flights.

The rule also applies at PVG but does not seem to be causing the same issues.

Capacity from Hong Kong was up 5% — reflected in flat rates from the hub — Narita improved by 10% and Inchoeon was up 3%.

Eastbound transpacific capacity is up 1% on a year ago, while in the opposite direction there is a 1% decline.

Latin America-Europe has experienced the biggest capacity decline with more than 80% of space being taken out in both directions.