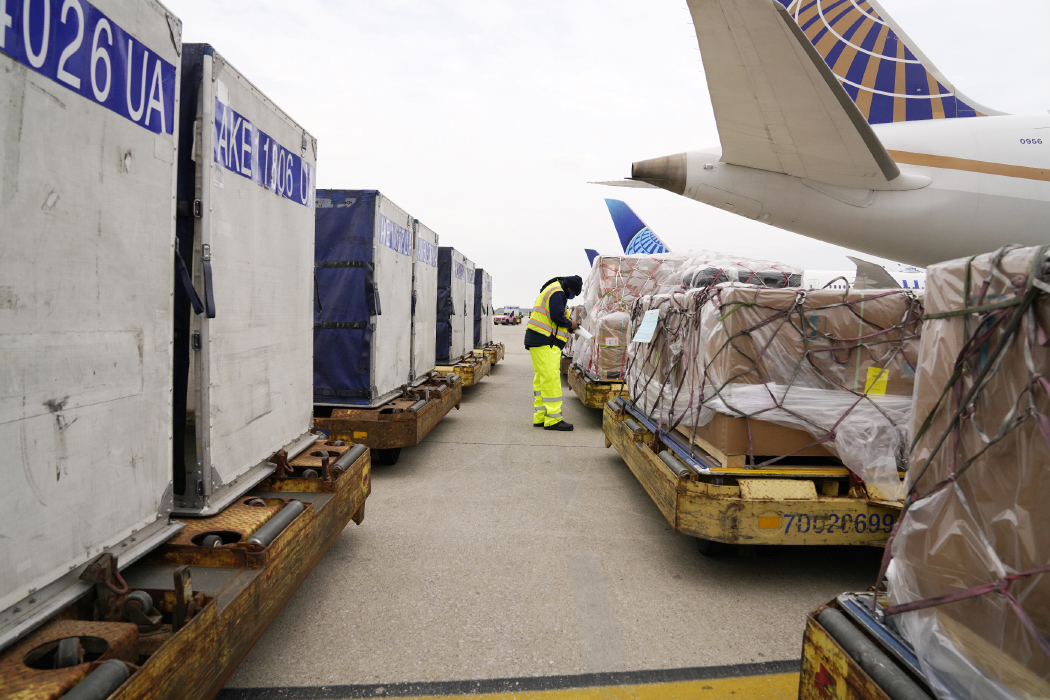 United Cargo helped facilitate a shipment of ventilators to Delhi

The air cargo industry has been transporting life saving supplies and medical equipment to India over the last few days as the country is ravaged by a second wave of Covid.

Lufthansa Cargo said that on three flights this week, a total of around 10 tons of medical equipment is on its way to India, with 280 oxygen concentrators, which concentrates oxygen from ambient air, being transported to Delhi on Thursday alone.

Lufthansa Cargo chief executive Dorothea von Boxberg said: “We see it as our responsibility to play our part in international aid. The dramatic situation in India shows how important it is to transport relief supplies quickly and easily to where they are urgently needed.

“That is why we at Lufthansa Cargo, together with the Lufthansa Group, are doing everything we can to maintain supply chains worldwide. This requires enormous flexibility on the part of our colleagues involved, good cooperation with our customers and decisive action on the part of international politicians, for example in special regulations for crews entering a country.”

FedEx Express said that it is working with organisations around the world to deliver critical medical supplies and equipment to assist in the fight against Covid-19 in India.

An initial shipment of 1,000 critically needed oxygen concentrators onboard a FedEx aircraft was delivered to New Delhi today as part of a collective initiative by multinational companies.

FedEx is also working with Direct Relief to move more than 1,800 pounds of medicine and personal protective equipment to India.

“As the impact of Covid-19 continues to grow in India, we are extremely grateful that our mission of connecting the world can bring relief to those most in need,” said Kawal Preet, president, Asia Pacific, Middle East, and Africa Region, FedEx Express.

“This is a time to come together so we have mobilised our global network and our team members to help the communities in India where we live and work.”

On Wednesday evening, United Cargo helped facilitate the first shipment of ventilators from Chicago to Delhi on flight UA898.

“United was honored to play a role in transporting these ventilators, donated by the US-India Chamber of Commerce DFW, to the Indian Red Cross. This is the first of several efforts United will be taking to support India during this time of great need.”

Qatar Airways said it is supporting international efforts to tackle the second Covid-19 surge in India by shipping medical aid and equipment to the country free of charge from global suppliers.

The airline intends to transport 300 tonnes of aid from across its global network to Doha where it will be flown in a three-flight cargo aircraft convoy directly to destinations in India where it is most desperately needed.

The cargo shipment will include PPE equipment, oxygen canisters and other essential medical items, and consists of donations by individuals and companies around the world in addition to existing cargo orders.

Earlier this week, SpiceXpress, the air cargo arm of SpiceJet, airlifted 1,000 oxygen concentrators from Hong Kong to Delhi utilising B737 freighter aircraft and transported via Kolkata.

In the last two weeks, more than 2,000 oxygen concentrators have been airlifted by SpiceJet.

Virgin Atlantic partnered with Khalsa Aid to deliver over 200 boxes of oxygen concentrators to Delhi, India.

The concentrators will be onboard the VS300 flying at 20:15 on April 30 from London Heathrow to Delhi.

The airline has subsequently offered support to the Indian Government on its flights to India next week, opening up space to carry further oxygen concentrators.

Senior first officer Jas Singh will be flying the essential medical supplies out to India this Saturday, and was instrumental in partnering with Khalsa Aid, working alongside the airline’s leadership team to secure space to carry the oxygen supplies.

On May 3, three Qatar Airways Cargo B777 freighters departed to India, carrying approximately 300 tonnes of medical supplies from around the world to support Covid-19 relief efforts.

The three flights departed one after the other bound for Bengaluru, Mumbai and New Delhi as part of Qatar Airways Cargo’s WeQare initiative.

The shipment included PPE equipment, oxygen canisters and other essential medical items, and consists of donations by individuals and companies around the world in addition to existing cargo orders.

Qatar Airways chief executive Akbar Al Baker said: “Having seen with great sorrow the impact this further wave of Covid-19 infections has had on people in India, we knew we had to be part of the global effort to support the valiant health care workers in the country.

“As the leading air cargo carrier in the world, we are in a unique position to offer immediate humanitarian support through the provision of aircraft to transport much needed medical supplies, as well as coordinating logistical arrangements. We hope today’s shipment and further shipments in the weeks to come will help ease the burden on local medical workers and provide relief to the impacted communities in India.”

IAG Cargo, meanwhile, said that it will operate a relief flight to India transporting 27 tonnes of medical aid.

The B777-200 will be loaded with emergency aid to Delhi to support the Indian government as the country continues to battle rising Coronavirus cases, with dwindling oxygen supplies.

A special project team was formed to organise the flight, which is due to leave London Heathrow on May 5, landing in Delhi on May 6.

While IAG Cargo and British Airways have maintained a vital air link between London and India throughout the pandemic, sending aid items on scheduled flights, this air lift is a special charter, fully funded by the two companies.

On May 8, SpiceXpress, the cargo division of Indian carrier SpiceJet, transported 1,800 oxygen concentrators and Covid relief material today from Hong Kong and Nanjing, China to Delhi and Mumbai respectively.

On May 12, SpiceXpress also airlifted 9,600 oxygen concentrators from Beijing, Wuhan, Nanjing and Hong Kong to Kolkata and Delhi.

The carrier deployed its wide-body cargo aircraft for the flights.

To date, the carrier has transported more than 27,000 oxygen concentrators from the USA, Hong Kong, Singapore and China.