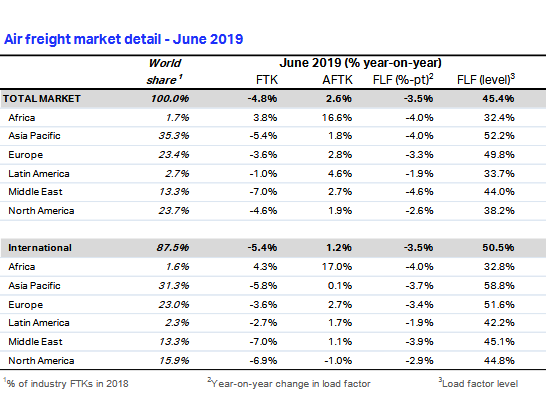 Air cargo traffic has now declined year-on-year for eight months in a row and signs of a recovery in recent months have turned out to be premature.

The latest figures from airline association IATA show that demand in terms of freight tonne kms (FTK) declined by 4.8% year on year in June bringing performance for the first six months to a decline of 3.6%.

IATA said that signs of a modest recovery in recent months appear to have been premature, with the June contraction broad-based across all regions with the exception of Africa.

Globally, trade growth is languishing, and business uncertainty is compounded by the latest tariff increases in the US-China trade dispute, IATA said.

IATA director general and chief executive Alexandre de Juniac said: “Global trade continues to suffer as trade tensions — particularly between the US and China — deepen. As a result, air cargo markets continue to contract. Nobody wins a trade war. Borders that are open to trade spread sustained prosperity. That’s what our political leaders must focus on.”

The IATA figures reflect those presented by analyst WorldACD, which show a decline in airfreight volumes of 8.9% in June compared with the same month in 2018.

“Only high tech (+3.7%), pharmaceuticals (+5.3%), flowers (+4.6%) and fish/seafood (+4.5%) resisted the onslaught, but the first two of these categories paid a price for their volume growth in the form of yields falling more than volume increased,” the analyst said.

“Although an important factor, the US-China trade war is not solely responsible for the fall,” IATA said. “FTKs for the ‘within-Asia market’ have decreased more than 10% over the past year.”

North American airlines saw demand decrease by 4.6% compared to the same period a year earlier and capacity increased by 1.9%.

IATA said that US-China trade tensions were weighing on the performance, with FTKs to Asia down 5%. FTKs on routes to/from Europe, South America and Middle East were also lower.

Airlines based in Europe posted a 3.6% year-on-year decrease in freight demand in June as comparatively strong cargo volumes within Europe helped to minimise the impact of weaker German exports.

There was a 7% decline in Middle Eastern airlines’ freight volumes in June and capacity increased by 2.7%. “Volumes to Europe (-7.2%) and Asia-Pacific (-6.5%) were particularly weak,” IATA said.

Latin American airlines experienced a decrease in freight demand in June 2019 of 1% compared to the same period last year and capacity increased by 4.6%.

IATA said that much of the decline in traffic can be attributed to weakness in the ‘within-South America market’, especially Brazil and Argentina, where FTKs fell 6.5%.

Finally, African carriers managed to report growth in June with an increase in demand of 3.8% year on year but capacity was up by more than 16%.

“This makes Africa the strongest performer for the fourth consecutive month. Route analysis shows that the Africa-Asia performance is strong—up 12% year-on-year,” IATA said.