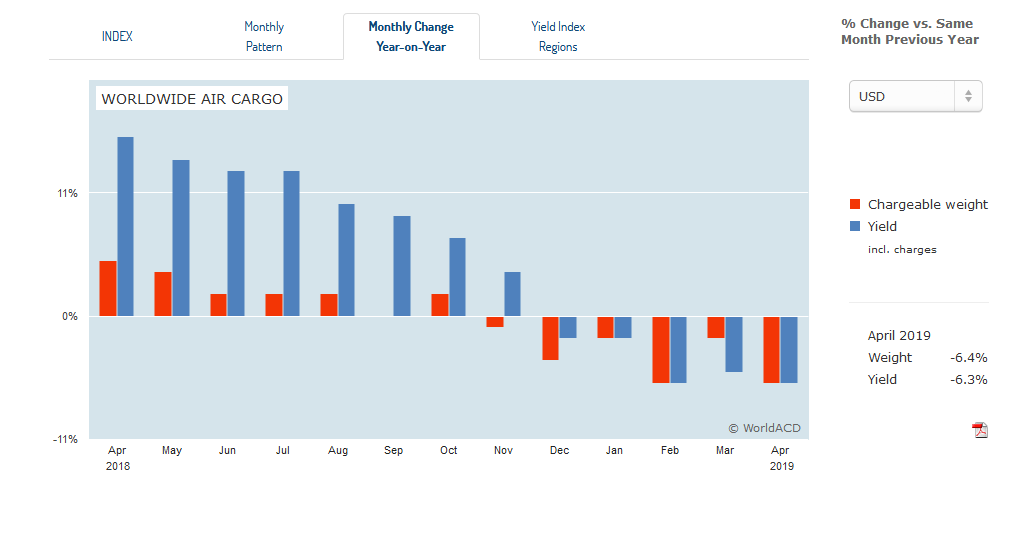 Analyst WorldACD has warned that air cargo markets are continuing to erode as uncertainty grows.

Numbers from the data firm show that cargo volumes (chargeable weight) declined by 5.4% year on year in April.

WorldACD searched for some positives, but said that overall there was no avoiding the tough market conditions.

“For quite a while now, reading about world trade has not been an undivided pleasure for people working in air cargo,” WorldACD said.

“More and more, they notice pessimism, bleak outlooks, and sombre moods. The latest figures bear out that things don’t look up at all in their business.

“April 2019 was the first month in which all regions, without exception, were confronted with the growing impact of adverse market movements that started last September.”

However, when looking on a region-to-region basis, as opposed to a regional overview, there were some trades that showed some signs of improvement compared with the first quarter.

“We noticed another development which merits some attention,” WorldACD said. “In the regions Africa, Middle East and South Asia and North America, the YoY figures for traffic within the region were slightly better in April than in Q1.

“But there is no denying that the bigger air cargo regions are hit hardest in the uncertain times we live in.

“Europe and North America, as well as Middle East and South Asia, were even denied such a small glimmer of hope. The contraction of business from these areas was shown in negative percentages not seen for years.”

On yields, the analyst said there was a 5% year-on-year decline in the first four months of the year.

“And their [yields] YoY decline is growing by the month,” WorldACD warned.