E-commerce: A gift from heaven for air cargo but challenges ahead 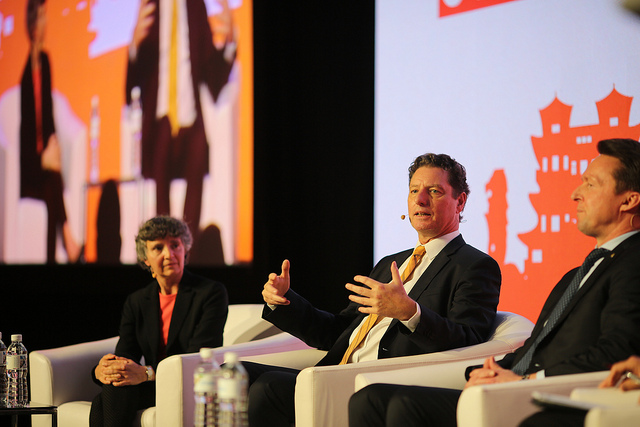 E-commerce is a “gift from heaven” for the air cargo sector but it faces several challenges if the industry is to capitalise on the opportunity it presents, according to speakers at the World Cargo Symposium.

Ludwig Hausmann, partner at McKinsey & Company, said that e-commerce had grown at a year-on-year rate of up to 20% over the last 15 years. Growth is expected to continue at 10-15% over the next five to 10 years.

Cross border e-commerce, which is expected to present the biggest opportunity to air cargo, is expected to grow even faster than the overall online sales market over the coming years – growing by as much as 25% each year.

Hausmann said the cross border “click-to-door” e-commerce market currently stands at 5bn shipments annually and is estimated to account for around 10% of total air cargo volumes. This is expected to grow to 20% by 2022, he added.

In contrast, its share of air cargo revenues is just 5%, but this is expected to improve to around 12% by 2022.

The top six trade lanes for cross border e-commerce, he said, are: intra-Asia, transpacific (each direction), Asia to Europe, intra-Europe and intra-North America.

Hausmann said the main requirement of e-commerce companies from airfreight was speed, with the 72 hours click-to-door delivery time set to become “the new normal”.

Meanwhile, the postal delivery system that is currently one of the main ways to transport online orders across borders is not quick enough to meet the 72-hour requirement and therefore there was a huge opportunity for the wider air cargo sector if it could work together to create integrated supply chains along the lines of the express firms, he said.

However, there are obstacles to be overcome. He said it was not the most profitable cargo type and therefore airlines need to move further upstream and downstream in the supply chain and offer seamless integration – from the apron, through customs and into the last-mile delivery system – in order to maximise yields.

Another way to increase yields could be to offer guaranteed capacity. He explained that at the moment postal volumes are only transported if there is space in aircraft bellies.

However, with speed becoming more important, retailers cannot afford to wait for spare capacity if they are to deliver within 72 hours. Guaranteed capacity would therefore be a major draw. Reverse logistics was another opportunity, he said.

“We see a lot of potential and opportunity but it is in the hands of the air cargo industry to strike while the iron is hot, otherwise you will just maintain what you already have,” he concluded.

Following the presentation, there were several questions from the floor with attendees questioning the safety aspect of transporting e-commerce shipments, something that is currently taken care of by postal companies.

A later speaker, Oliver Bijaoui, chairman of the board, International Airport Services, and formerly head of ground handler WFS, said e-commerce was a “gift from heaven” for air cargo.

He said the safety concerns could be managed by ground handlers – afterall they already do this process for general cargo.

He also felt the challenge of processing thousands of smaller shipments could be met by consolidating shipments into big cartons on skids and then breaking them down at warehouses operated by e-commerce companies, rather than trying to do this at the airport.

For Bijaoui the main challenge faced by air cargo is the amount of time it can take to process shipments through customs.

He said customs was “scratching its head” but working hard to find solutions.

In a later panel, Schiphol Airport head of cargo Bart Pouwels looked at how customs could handle the “tsunami of parcels” and the declarations that come along with that.

The panel said that digital solutions could provide the answer, allowing customs declartions and other documents to be processed much earlier in the supply chain.

World Customs Organization senior technical officer Pashupati Pandey said that intermediaries had a big role to play in developing these kind of portals and in helping customs to process e-commerce shipments.

These types of platforms would also provide greater visibility to the consumer and the data could also help speed up the overall supply chain.

While many expect air cargo to only face competition from integrators and e-commerce companies themselves, Jorgen Van Mook, head of network management and innovation at the International Postal Corporation, said that seafreight could also play a role.

He said that predictive analytics was allowing e-commerce companies to hold stock at regional warehouses as they can predict what consumers will order.

Holding stock regionally and being able to predict consumer behaviour would in turn allow companies to use slower transport modes, such as ocean transport, he explained.

During an e-commerce panel discussion on the opening day of the IATA event, panellists were asked whether they felt the air cargo industry was prepared to handle the expected growth in online sales.

Atlas Air Worldwide executive vice president and chief commercial officer Michael Steen said he was not expecting a smooth increase in e-commerce growth and instead there would be spikes and plateaus because there are some obstacles that could interrupt growth.

He pointed out that there were several regions that did not have the regulations in place that are necessary to accommodate e-commerce.

However, he said while some locations were ready for e-commerce growth, others were lagging behind. He also said that the supply of cargo capacity could present a problem.

“While on the asset side we are lagging behind and on the digitisation side, we are a lot behind. We need to think about this as an industry – how do we get that alignment so we can be relevant to these platforms.”

Steen pointed out that some e-commerce firms have the ambition of delivering globally within 72 hours whereas the airfreight industry takes on average six days to deliver a product from door-to-door.

This is down to “antiquated process” and the lack of harmonisation of customs procedures, Steen said.

“The e-commerce platforms aren’t going to care too much about that because if the infrastructure and the processes aren’t there, then they will build it themselves and we see examples of that already,” he concluded.

Supply chain consultant Wolfgang Lehmacher agreed that there could be some “bumps in the road” when it comes to e-commerce growth.

He pointed out that is only a matter of time before the sector becomes covered by the World Trade Organisation and governments become more organised in collecting e-commerce taxes, which could slow growth.

As for how air cargo needs to develop to cater for e-commerce, Lehmacher said the industry’s ability to integrate with the online sales platforms to improve visibility was a major challenge.

“Consumers don’t just want it now, they want to see it when it leaves, where it is, when it will arrive and potentially interrupt the flow of goods.

“From an industry perspective, integrating digitally is one of the pre-requisites to being a player – the industry has to support platform driven transactions.”

Adriana Diener, global managing director, freight and logistics, Accenture said she would like to see greater automation of cargo facilities to assist in processing lots of smaller items, rather than the single big shipments that the industry is used to with traditional air cargo.