Air cargo traffic growth “outperformed forecasts” in 2016 after ending the year with a demand surge.
The latest figures from IATA show that air cargo traffic measured in freight tonne km (FTK) terms increased by 3.8% year on year in 2016.
IATA said this was more than double the average growth rate of the last five years of 2%.
However, it was not all good news for the airfreight industry as cargo capacity during 2016 expanded by 5.3% and as a result average freight load factors for the year stood at 43% compared with 43.6% in 2015.
The demand improvement came after a surge in traffic towards the end of the year, with FTKs for December finishing 9.8% ahead of the prior year level.
Click on the image below to access the IATA interactive dashboard or click here to access the data hub 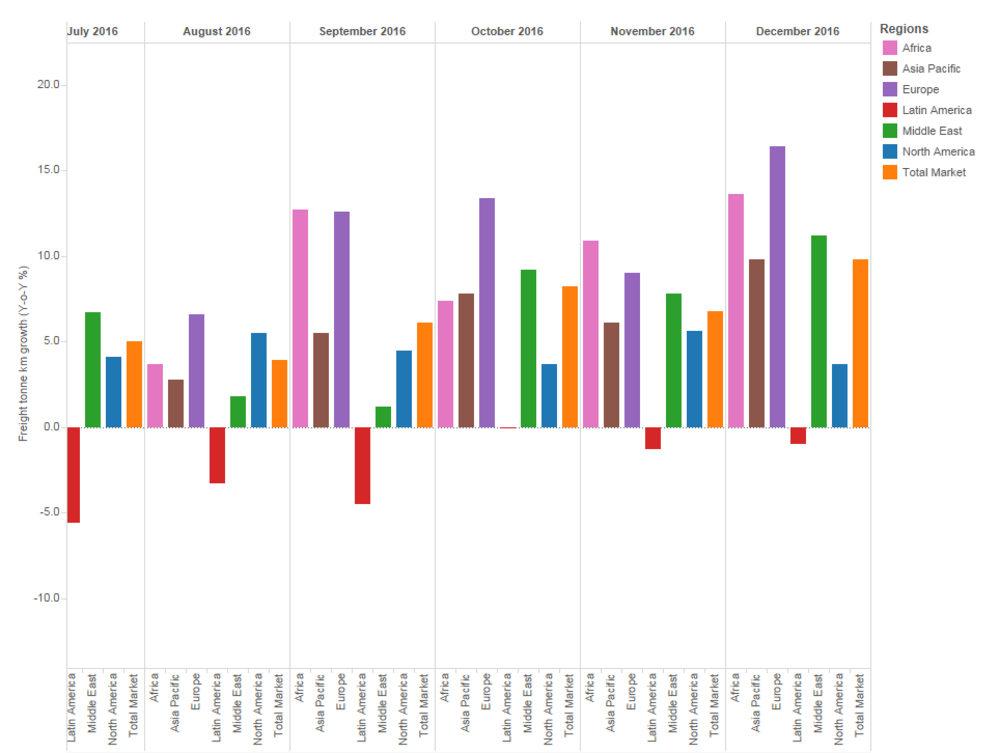 IATA attributed the strong peak season to “an increase in the shipment of silicon materials and a turnaround in new export orders”.
The early timing of the Lunar New Year − in January 2017 − may also have helped push demand higher in December.
The organisation continued to warn that world trade remained flat and expressed fears over protectionism.
IATA director general and chief executive Alexandre de Juniac said: "In terms of demand, 2016 was a good year for air cargo.
“That was boosted by solid year-end performance. Looking ahead, strong export orders are good news, but there are headwinds.
“The most significant is stagnant world trade which also faces the risk of protectionist measures.
“Governments must not forget that trade is a powerful tool for growth and prosperity.
"The air cargo industry must also improve its competitiveness. We know that the way forward is defined by digital processes which will drive efficiency and improve customer satisfaction.
“We must use the momentum of renewed demand growth to drive the important innovations of the e-cargo vision."
Breaking performance down, all regions, with the exception of Latin America, experienced positive freight growth in 2016.
European airlines posted the strongest performance for the year with a 7.6% year on year improvement, helped by a 16.4% boost in December. The annual growth accounted for almost half of the total annual increase.
“The seasonally-adjusted growth trend is strong and corresponds with the sustained increase in export orders in Germany and the ongoing weakness in the Euro,” IATA said.
Asia-Pacific carriers saw demand improve by 2.1% in 2016, with December up by 9.8%.
IATA said: “Seasonally-adjusted volumes are now back to the levels reached in 2010 during the post-global financial crisis bounce-back.
“The increase in demand is captured in the positive outlook from business surveys in the region.”
North American airlines saw freight demand increase by 3.7% in December and 2% for the full year as the strength of the US dollar continued to boost its inbound market but kept the export market under pressure.
For Middle Eastern carriers, freight traffic increased 11.2% year on year in December and was up by 6.9% for the full year.
While this was the second largest annual improvement registered by any region, it was the Middle East’s slowest pace of growth since 2009 and well below the 12% average annual rate seen over the past decade.
“The slowdown in growth is mainly due to weak freight volumes between the Middle East and Asia, and the Middle East and Europe,” IATA explained.
In Latin America, airlines experienced a demand contraction of 1% in December 2016 and a 4.2% slip for the full year – the second year in a row demand has declined – as the region continues to be blighted by weak economic and political conditions, particularly in the largest economy, Brazil.
Finally, African carriers registered a 13.6% demand improvement in December, which contributed to an annual growth in freight demand of 3.1%, down from 4.5% in 2015.
“However, capacity surged by 25.5% in the 2016 calendar year on the back of long-haul expansion, particularly by Ethiopian Airlines, causing a fall in the freight load factor.”