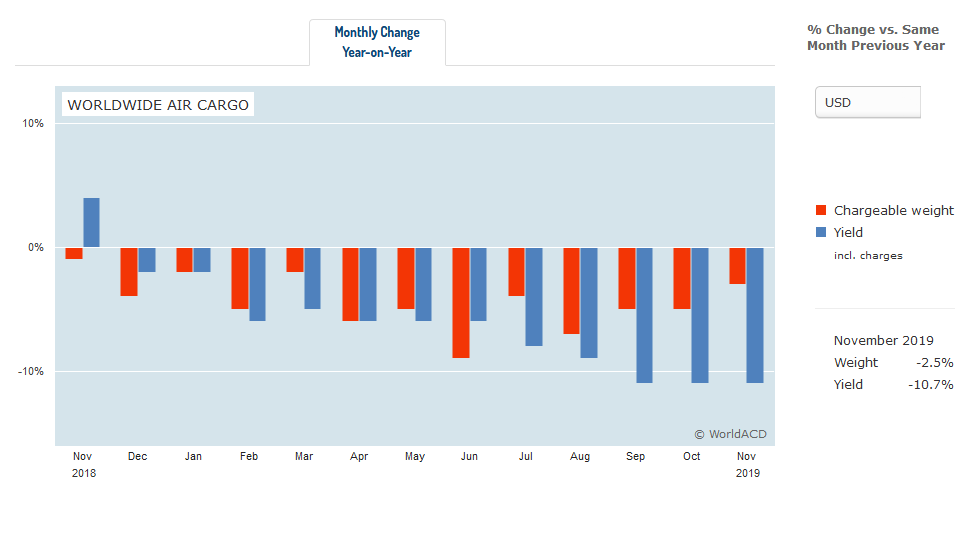 The air cargo industry began to show signs of emerging from its slump as last year headed towards its conclusion.

Data from analyst WorldACD showed that cargo demand in chargeable weight declined by 2.5% in November, an improvement on declines of 6.9% in August, 5.3% in September and 4.7% in October.

Meanwhile, the analyst said, load factors have climbed steadily since August, improving by 2 to 2.5 percentage points in September, October and November.

“Does this mean we are going to end the year on a – relatively – high note?” WorldACD questioned.

“If the trend continues, the month of December may be the first month in 2019 showing no year-on-year (YoY) decline… But even if December YoY would turn out to be ‘neutral’, the worldwide volume for the full year 2019 will be 4.3% [lower than] 2018.”

WorldACD said that China and Hong Kong performed particularly well in November, with the two origins recording a 5.1% increase compared with 2018.

“[The] main engines behind this growth are the destinations Europe and the Middle East & South Asia (MESA), but exports to North America decreased,” the analyst said.

“High Tech was the fastest growing product category excluding China & Hong Kong. The origin Asia Pacific as a whole, whilst more than 5% down for the year 2019, did not show a YoY decrease in November. All other origin regions except one [Europe], also showed a better YoY performance in November than in the ten months before.”

Apart from DHL and Sinotrans, the world’s larger forwarders did not feature in the list of top growth forwarders in 2019.

Worldwide, special cargo continued to grow, recording its highest growth for the year in November as it improved by 4.2% YoY.

Looking ahead to next year, IATA’s team of economists have predicted that air cargo demand will increase by 2% in 2020.