Air cargo traffic growth continued to slow in June as a weakening in trade, the end of a re-stocking cycle and the grounding of the Nippon Cargo fleet took its toll.
The latest statistics from IATA show that air cargo traffic in freight tonne kms increased by 2.7% year on year in June, which represents lags behind the 4.7% increase registered over the first half and is the second lowest growth level of the year so far.
Volume figures from analyst WorldACD for the month showed even lower growth levels, with the weight of cargo carried increasing by just 0.4% compared with a year ago.
IATA said that there were three main factors driving the slowdown. The restocking cycle, during which businesses rapidly built up inventories to meet demand, ended in early 2018. There was a marked fall in air cargo volumes from March.
We are now seeing a structural slowdown in global trading conditions as indicated by the fall in the Purchasing Managers Index (PMI) to its lowest level since 2016. Factory export order books have turned negative in China, Japan and the US.
The temporary grounding of the Nippon Cargo Airlines fleet in the second half of June exaggerated the slow-down by shaving up to 0.5 percentage points off June growth.
IATA director general and chief executive Alexandre de Juniac said: "Air cargo continues to be a difficult business with downside risks mounting.
“We still expect about 4% growth over the course of the year, but the deterioration in world trade is a real concern.
“While air cargo is somewhat insulated from the current round of rising tariff barriers, an escalation of trade tension resulting in a ‘reshoring’ of production and consolidation of global supply chains would change the outlook significantly for the worse.
“Trade wars never produce winners. Governments must remember that prosperity comes from boosting their trade, not barricading economies.”
Looking at regional performance, Asia-Pacific airlines saw freight demand “increase by just” 1.5% in June.
The international freight performance by the region fell to 1.1%, a 17-month low. For the first six months of 2018 FTKs expanded by 4.6% year-on-year
European airlines posted a 3.3% increase in freight volumes in June 2018.
IATA said: “Growth is being affected by a slowdown in export orders. Supply chain bottlenecks, which are often alleviated by air freight, have also eased.”
For the first half of 2018, the region expanded 4.1% year on year.
North American airlines’ freight volumes expanded 3.8%, with IATA saying the strong dollar and robust growth in the US economy is driving inbound shipments. Growth for the first half of 2018 was 5.3%, second only to Latin America.
Middle Eastern carriers’ freight volumes grew 3.8% in June, which was an improvement on the May figure of 2.7% but this is well below the average five-year rate of 9.5%.
“Expectation is for volume growth to remain modest in the months to come,” IATA said.
Latin American airlines experienced growth in demand of 5.9% in June continuing their recent run of posting the largest increases of any region. First half growth stood at 10.1%.
African carriers saw freight demand contract 8.5% in June and capacity fell by 1.4%.
Click on chart for interactive version 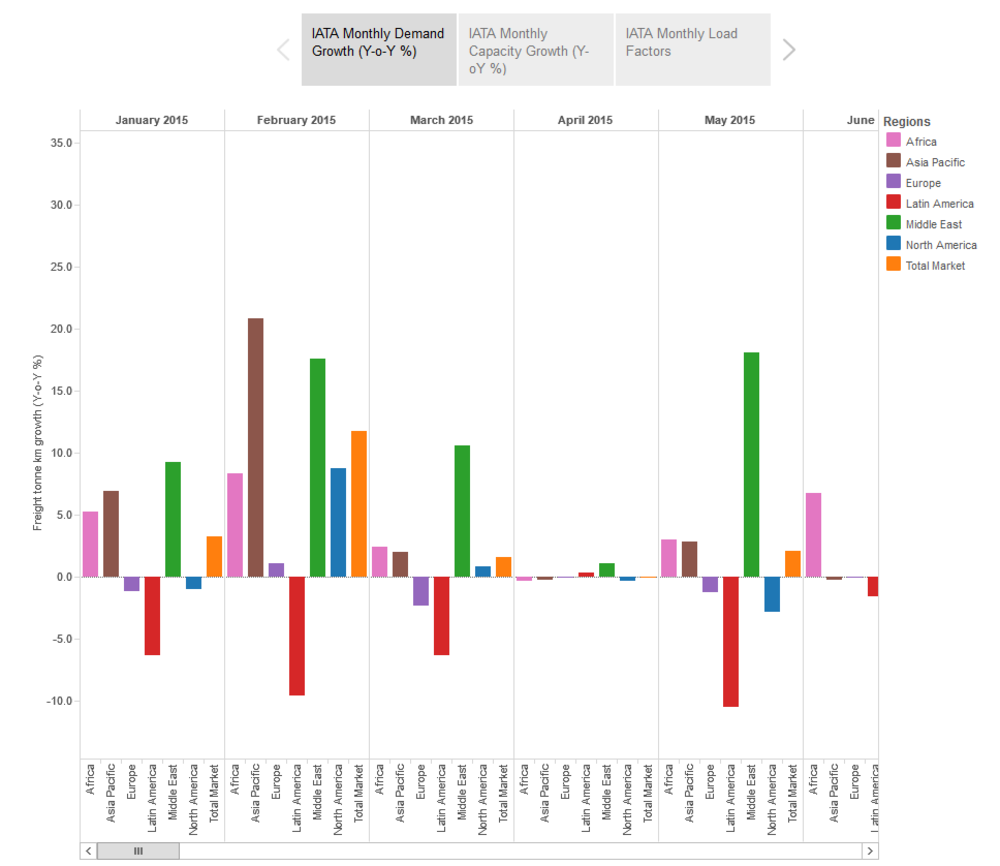