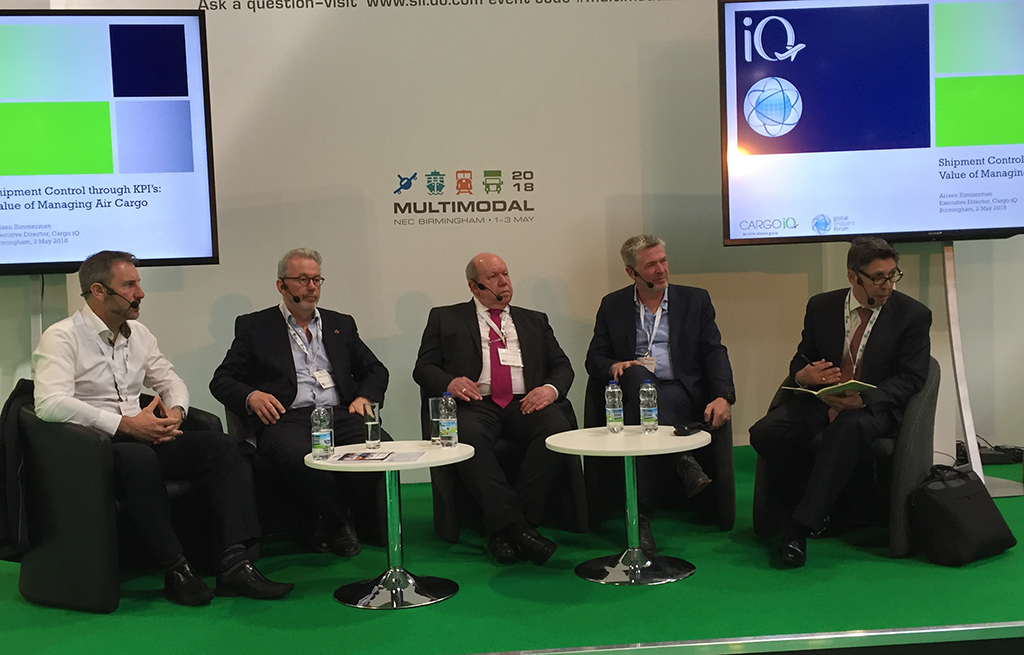 Air cargo’s emerging key performance indicators (KPIs) look set to become a feature of future contracts between airfreight stakeholders.
Ground handlers, general sales agents (GSA) and freight forwarders are likely to see KPIs – currently in test phase – being built into their contracts with airlines and shippers.
That was the impression gained in the airfreight session at the Multimodal conference in Birmingham where the discussion focused on KPIs, the joint project between IATA’s Cargo IQ interest group and the Global Shippers’ Forum (GSF).
Mark Olney, Air Canada Cargo’s general manager for Europe, Middle East, India and Africa, said there was a need to build cargo KPIs into airline contracts with ground handlers and GSAs.
Olney, a panellist in the session, said that the industry should avoid “a fear of failure” about KPIs, adding that they were the start of a journey: “We are where we are and we can improve on that.”
Lothar Moehle, director of security standardisation at German forwarder DB Schenker, a founder member of Cargo IQ, said that his customers “demand more and more transparency in the contracts we sign", adding that it takes time to set up the IT processes for KPIs and also “change management” to train staff in their application.
Moehle added that there was a “large variety of shippers” with differing requirements, including those who need information for every shipment “milestone” while there were others who “just want us to find a solution” if a problem occurs.
Chris Welsh, secretary general of the GSF, explained that the 19 agreed steps in the door to door KPIs – whittled down from more than 91 – were designed to bring “reliability and predictability” in the air cargo supply chain and to provide shippers with “confidence” that their goods would be delivered on time.
Fellow panellist, Cargo IQ’s executive director, Ariaen Zimmerman, said that the KPIs would allow air cargo stakeholders “to speak a common language on performance management on the door to door lifecycle” of a shipment from the original shipper to the warehouse, to the airport and to the airline, including final delivery.
He added it was time that the air cargo industry put a value on how it measured its performance against targets by removing the “many acronyms flying around” and to “provide clarity over what we mean”.
Welsh, who was chairing the panel, said that shippers were focused on five service level KPIs and seven tracking and control criteria that gave them transparency over the status of their shipments in the air cargo supply chain.
Echoing Zimmerman’s point about a common language on KPIs, Moehle added that it was important to know: “When we press the button, what does it mean?”
Welsh said that he thought the air cargo industry was less advanced than ocean freight sector, in terms of KPI acceptance, while Moehle said that was not his impression. The forwarder panelist said that there was a great deal going on “behind the scenes” in the airfreight sector, a sentiment echoed by Tristan Koch, managing director cargo sales, EMEA, American Airlines.
Koch said that KPI end to end data, as well as the airport to airport data component, were an important tool in improving quality but added that he felt there would be reluctance by some stakeholders to share data, summed up as: “Who will show their hand first?”
Koch added that there should also be a “Plan B” for the smaller freight forwarders to access KPIs who do not have “the pot of money” to invest in new IT systems that the global forwarder giants have, making the point also that the industry as a whole is “way behind the Amazons of this world”.
Zimmerman said that the growth in e-commerce shipments and the need to manage those consignments at the “granular piece level” was “high on the radar” for Cargo IQ and the GSF.
The industry needed to improve the data made available on the final leg, the airport to door segment of delivery, said Zimmerman, adding: “The challenge is for the IT companies to get that data”.