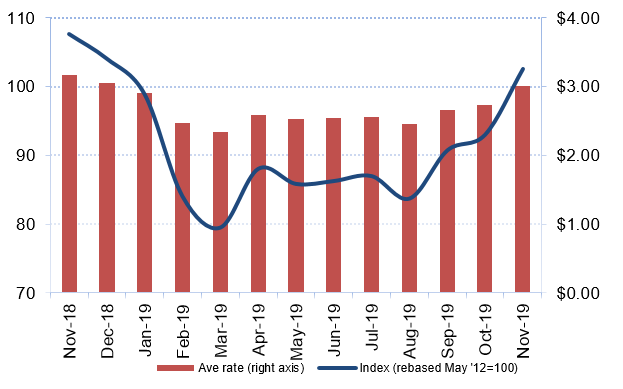 Airfreight rates continued to climb in November as average prices reached their highest level in 2019.

The fact that 2019 prices reached their highest level in November is in line with previous years and comes as the industry enters its traditional pre-Christmas peak season.

For comparison, November’s prices were up on October’s average rates of $2.74 per kg but were down on the $3.16 per kg achieved during the same month last year.

“All in airfreight rates elevated to $3.02 per kg this month, which shows 10% increase from previous month, however 5% lower when compared to same month previous year. Based on historical trend, Drewry expects airfreight rates to erode in December,” the consultant said.

The index is based on buy rates paid by forwarders for standard airport-to-airport flights on 28 major east-west routes for cargo above 1,000 kg.