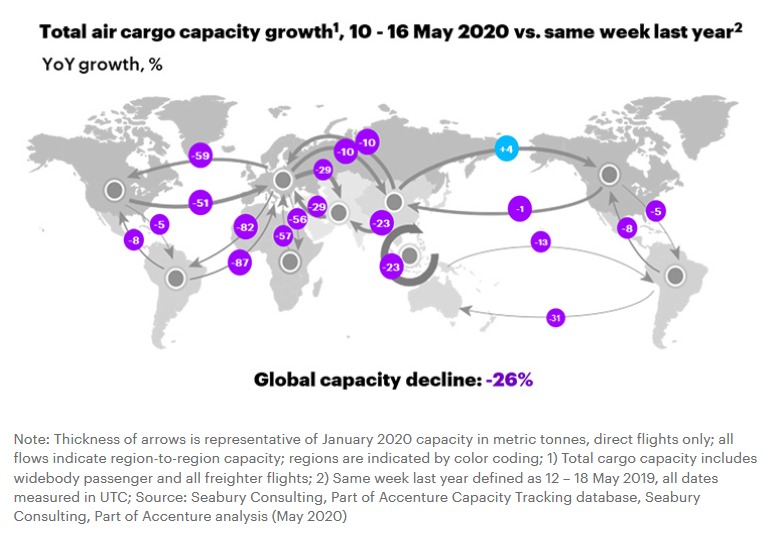 Airfreight rates out of Asia Pacific appear to have peaked, with prices from Shanghai to Europe and North America both declining last week.

The latest figures from TAC Index show that after seven weeks of rapid increases, rates from Shanghai to North America last week declined by 11.7% compared with a week earlier to $10.83 per kg.

Prices from Shanghai to Europe declined by 12.3% week on week to $9.81 per kg. Rates on this route have been fluctuating since the start of May.

It should be noted rates are far above the levels achieved last year, when Shanghai-Europe stood at $2.49 per kg and Shanghai-North America was at $3.15 per kg.

Forwarders reported that congestion at Shanghai had begun to ease last week. Meanwhile, capacity once again closed in on the year-ago level last week.

Accenture’s Seabury Consulting said that air cargo capacity last week was 26% down on a year ago, compared with 28% the week before.

Capacity from Asia Pacific to North America is up 4% compared with a year ago, while from Asia to Europe it is 10% down.

Its figures show that belly capacity is up 17% on the week before which equates to 27,000 tonnes of capacity or 1,820 flights.

Looking ahead, derivatives broker Freight Investor Services said the outlook remains uncertain with several factors likely to play a role in how the market progresses.

“Much is being touted about an on-coming C-Check of freighter equipment (a 1-2 week inspection of individual aircraft),” it said in its weekly update.

“The second unknown is the scale of passenger demand, and thus the availability of belly capacity. The reluctance of governments to engage in open air-bridges, and the asymmetry of quarantine measures, fix the stopper on passenger travel for the near future.

“The third unknown, is the impact and size of consumer demand as ‘non-essential’ economies start to return from mid-June onwards. Inventories will either have to react to high demand, thus causing a sharp, high-speed volume spike.

“Or, demand will slump in line with a recession, and cargo will move on slower transport modes (container, rail), or not at all.”