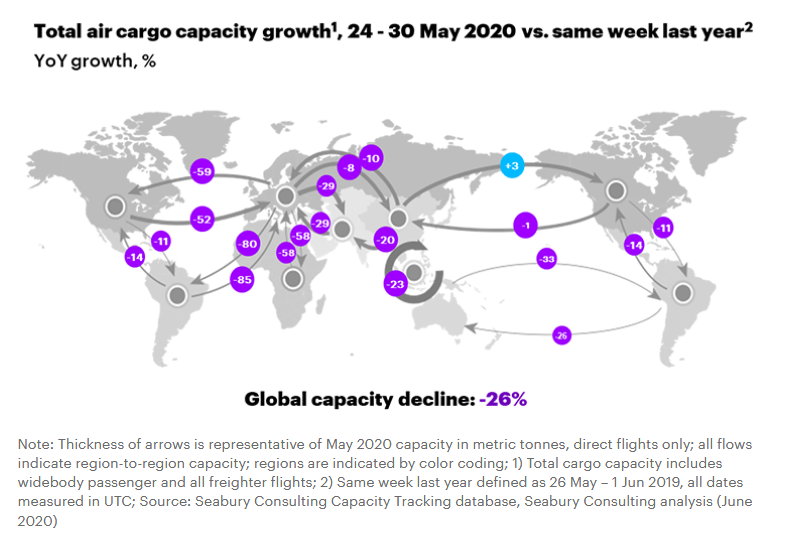 TAC Index figures show that last week average prices from Shanghai to North America dropped by 23.9% week on week to $5.80 per kg. From Hong Kong to North America there was a 9.7% fall to $6.08 per kg.

Prices from Asia Pacific to North America began to slide in mid-May. However, they are still far above this time last year when carriers were able to achieve $3.11 per kg from Shanghai and $3.69 per kg from Hong Kong.

Rates from Shanghai to Europe began to fall in mid-May while from Hong Kong prices started to drop off this week.

Data from Accenture’s Seabury Consulting shows that air cargo capacity appears to have stabilised over the past three weeks at about 26% down on the same period a year ago. From Asia Pacific to North America capacity is up by around 3% on a year ago while to Europe it is around 10% down.

Therefore, it appears that it is the demand side of the equation that is driving the rate declines.

Seabury said that airlines have been reducing their use of passenger-freighter flights as urgent demand for PPE slows down.

“After a strong 14% week-over-week growth since beginning of April, passenger freighter capacity from China declined 8%, a decrease of 2,000 tonnes when compared to last week,” Seabury said.

“Decrease in passenger freighter capacity was widespread across all carrier regions. The carriers from the Middle East & South Asia and North America saw the highest decline.”

Meanwhile, attention is now turning to what demand will be like now that the urgency to PPE has slowed and what impact the gradual re-introduction of passenger services will have on the market.

“Indeed, prices have dropped well before the proposed mid-June capacity boost, as airlines start to put aircraft back on-line for passenger duty.

The market will be out of the frying pan and into the fire, faced with political and economic uncertainty on fresh news of China-US tensions, global worsening (according to The WHO) of the Covid-19 pandemic, and widespread protests and riots in North America. A dampened version of these protests has spread over into Europe.”