Airfreight traffic growth back on track in April Airfreight traffic growth was back on track in April after an "abrupt" slowdown in performance during March.
The latest figures from IATA show that freight tonne kms (FTK) increased by 4.1% in April, compared with a “sharp fall” in growth during March to 1.8% — a 23-month low.
The end of the restocking cycle, poor weather conditions and the effects of the Chinese New Year were blamed for the performance in March.
The airline association pointed out that while there was an improvement in April, growth levels still lag behind the rapid improvement experienced in 2017 when FTKs improved by 9%.
IATA said the weaker growth in air cargo is primarily due to the end of the restocking cycle, during which businesses rapidly increase their inventory to meet unexpectedly high demand.
It added that the Purchasing Managers’ Index (PMI) for manufacturing and export orders fell in April 2018 to its lowest level since 2016.
A softening of global trade is also evident with containerised freight demand slowing in tandem with airfreight demand.
Load factors were also under pressure during the month as supply increased by 5.1% and the freight load factor slipped 0.5 percentage points to 44.8%.
For the year to date, freight traffic is up by 5.1% compared with a year ago.
IATA director general and chief executive Alexandre de Juniac said: "April saw a strengthening from the abrupt slowdown in growth experienced in March. This is good news.
“We remain cautiously optimistic that demand will grow in the region of 4% this year. But the forecast appears to have increasing downside potential.
“Oil prices continue to rise as does protectionist rhetoric. Borders open to people and to trade drive economic growth and social prosperity. We are all disadvantaged when they are closed.”
Looking at regional performance, Asia-Pacific airlines saw freight demand recover in April to grow 3.9% compared to the same period last year and capacity increased by 6.7%.
North American airlines’ freight volumes expanded 3.2% in April compared to the same period a year earlier. This was a slight deceleration in demand from the previous month.
“The weakening of the US dollar over the past year has helped boost demand for air exports. More recently however, the US dollar has been rising,” IATA said.
European airlines posted a 2.4% increase in freight volumes in April, which was more than double the rate of growth of the previous month, and capacity increased 4%.
“The strength of the Euro and a softening of export orders in Germany pose downside risks to European carriers,” IATA explained.
Middle Eastern carriers posted the second fastest year-on-year growth in freight volumes in April, up 7.3%, a “significant acceleration” in demand over the 0.8% recorded the previous month.
The increase mainly reflects developments from a year ago rather than a substantive change in the near-term trend, the association explained.
Latin American airlines experienced growth in demand of 10.6% during the month, which is the largest increase of any region for the second consecutive month.
The pick-up in demand over the last 18 months comes alongside signs of economic recovery in the region’s largest economy, Brazil.
Finally, African carriers saw freight demand grow 5.6% compared to the same month last year, after a decline of 3.4% in March, but capacity increased by 23%.
Click on chart for interactive version 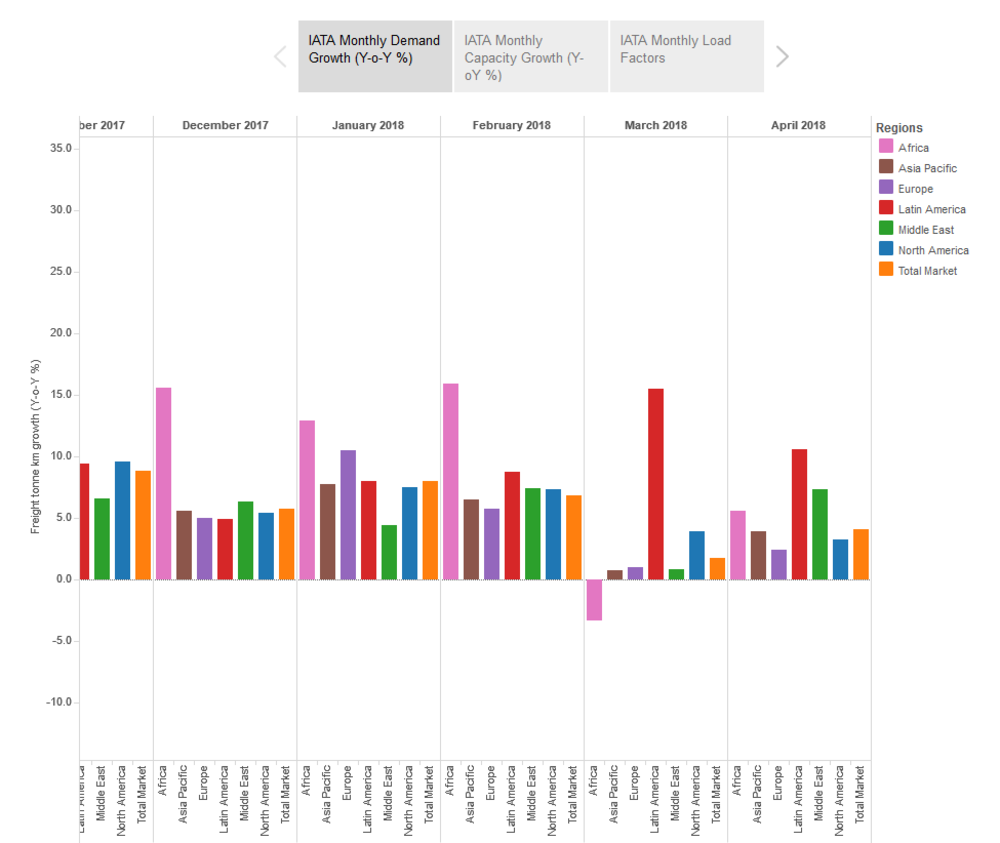