Air cargo demand growth continued its “positive momentum” in January in line with a steady rise in new export orders.
The latest monthly statistics from IATA show that air cargo demand in freight tonne km terms increased by 6.9% year on year in January.
While this lags behind the 9.8% improvement registered during December, it is well ahead of the average growth rate recorded over the past five years of 3%.
In weight terms, WolrdACD said last week that cargo demand had increased by 4.9% in January.
IATA said the improvement was in line with new export orders and added that there had been an increase in the shipment of silicon materials that are typically used in high-value consumer electronics.
It also warned that January comparisons are affected by the timing of the Chinese New Year and that the rise of protectionism could have a negative impact on demand in the future.
IATA director general Alexandre de Juniac said: "It’s been a good start to the year for air cargo. Demand growth accelerated in January, bolstered by strengthening export orders. And that outpaced the capacity growth which should be positive for yields.
“And, longer-term, the entry into force of the Trade Facilitation Agreement (TFA) will cut red tape at the borders for faster, cheaper and easier trade.
“The onus is now on the industry to seize the opportunity to accelerate the modernisation of processes to make air cargo an even more compelling option for shippers."
While demand increased by 6.9% in January, the amount of cargo capacity was up by the lower amount of 3.5% year on year and as a result cargo load factors improved to 42.1% compared with 41.3% in the same month of 2016.
Looking at regional airline performance during the month, Asia-Pacific airlines saw demand in freight volumes grow 6% in January 2017 but capacity increased by 6.6%, compared to the same period in 2016.
IATA said: “The increase in demand is captured in the positive outlook from business surveys in the region. China’s Purchasing Managers Index (PMI) rose to a 21-month high, Japan’s PMI to a 36-month high, while Taiwan, Korea, and Vietnam also reported increases in new export orders.”
North American airlines’ freight volumes expanded 6.1% in January 2017 year on year, as capacity increased 0.6%, with the strength of the US dollar improving the inbound market but keeping exports under pressure.
At European airlines there was an 8.7% increase in freight volumes in January 2016.
“The strong European performance corresponds with an increase in reported new export orders, particularly in Germany over the last few months,” IATA said. “It was also helped in part by the ongoing weakness in the Eurozone.”
Middle Eastern carriers’ freight volumes increased 8.4% year on year in January 2017 and capacity increased 3.3%.
Latin American airlines experienced a demand contraction of 4.1% in January 2017 compared to the same period in 2016 and a decrease in capacity of 1.4%.
The region continues to be blighted by weak economic and political conditions.
Finally, African carriers’ saw freight demand increase by 24.3% in January 2017 compared to the same month last year, helped by very strong growth on the trade lanes to and from Asia.
“Demand between the two continents jumped by 57% in January on the back of rapid long-haul expansion and increased direct services.”
Click here to access the data hub or on the chart below to view interactive graphic 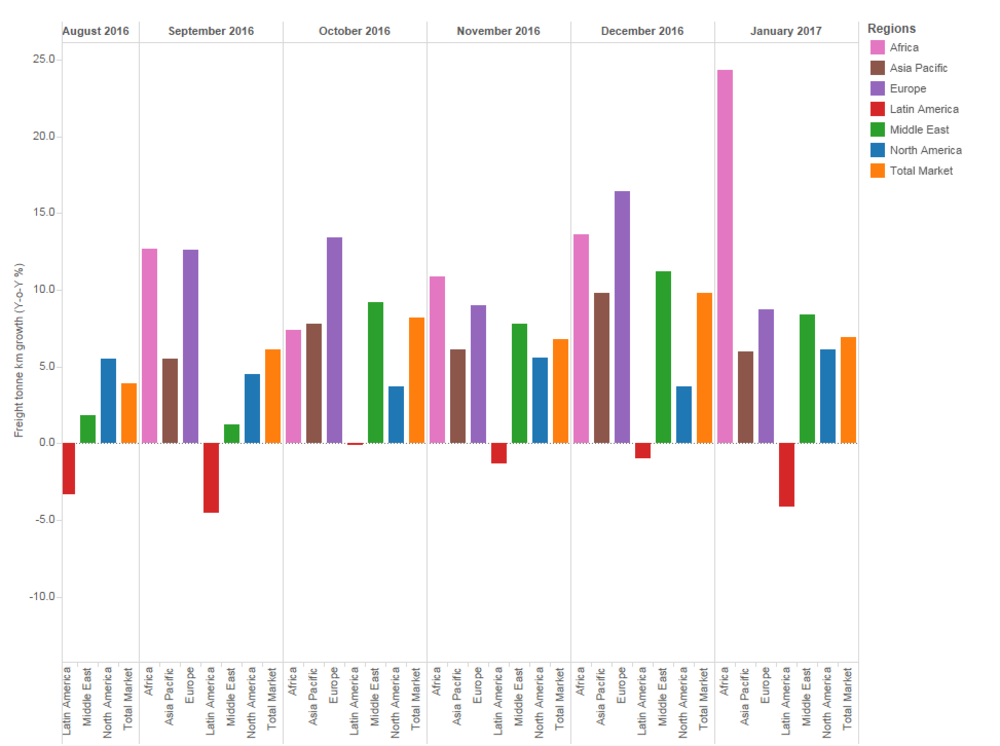