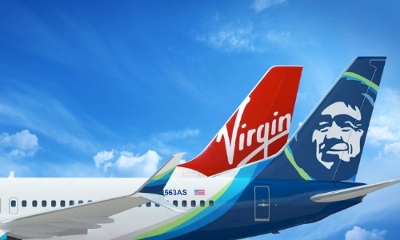 Alaska Air Group, parent company of Alaska Airlines, and California-headquartered Virgin America have confirmed their boards of directors’ approval of a deal under which the former will acquire Virgin America’s shares for $2.6bn; including Virgin America’s debt and aircraft lease obligations, the transaction is valued at approximately $4.0bn.
The merger will expand Alaska Airlines’ presence in California, adding to its core market in the Pacific Northwest. It will also secure its position as the US’s fifth-biggest carrier and as a serious competitor to the big four US airlines.
The combined entity will be able to offer 1,200 daily flights throughout a network incorporating hubs in Seattle, San Francisco, Los Angeles, Anchorage, Alaska and Portland, Oregon.
Headquartered in Seattle, it will have a fleet of approximately 280 aircraft, although some of them will be smaller, regional types, while the combined airline is projected to have annual revenues of more than $7 billion.
Until regulatory approval to close the deal is received and a single operating certificate can be achieved, Alaska Air Group chairman and CEO Brad Tilden and Virgin America president and chief executive David Cush will co-lead a transitional management team.
The companies expect to complete the transaction with the required regulators’ approval no later than January 1 next year.
There had been rumours of a Virgin America acquisition for a while. JetBlue Airways had also been interested.
Alaska Air Group intends to form a wholly-owned airline service provider subsidiary called McGee Air Services. The enterprise will undertake roles such as ground handling and aircraft cleaning, and will operate independently; it will initially solely meet the requirements of Alaska Airlines, but is also expected, as the business expands, to serve other carriers.
Alaska Airlines traces its roots back to 1932, when Linious ‘Mac’ McGee created McGee Airways. The name McGee Air Services is said by Alaska Air Group to hark back to McGee’s strong work ethic, entrepreneurial spirit and fortitude.