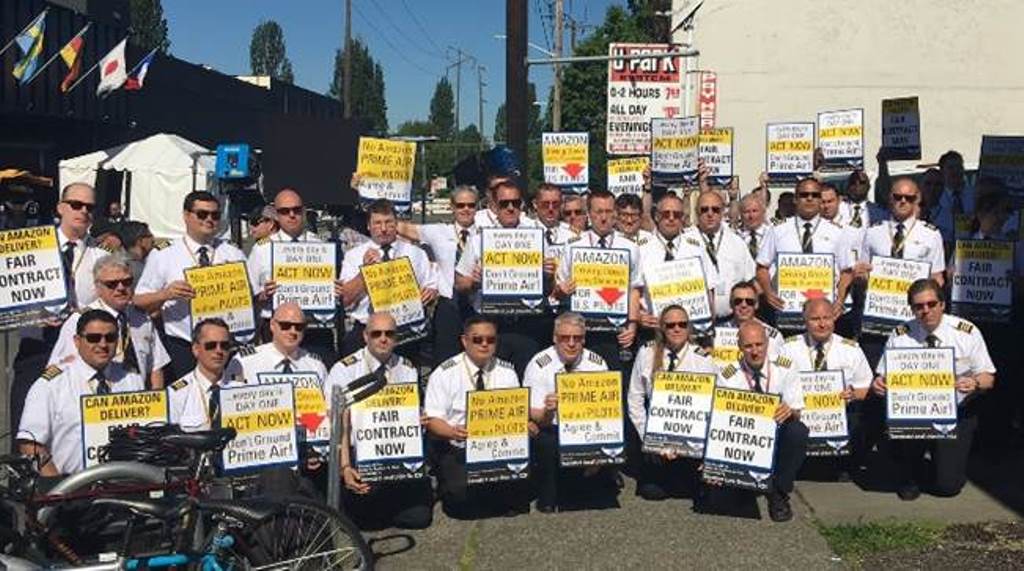 Cargo pilots who fly for Amazon Prime Air picketed the e-commerce giant’s annual shareholder meeting yesterday to alert the company to a “looming pilot shortage” as negotiations over new collective agreements continue.
The pilots, who are employed by aircraft lessors Atlas Air Worldwide Holdings (AAWW) and ATSG, say the shortage threatens to disrupt operations across the US and also the success of Prime Air.
“Amazon is at the heart of our carriers’ vision for the future and that’s why it’s our responsibility as pilots to alert shareholders about the underlying issues at our airlines that could spell trouble for our relationship,” said Marvin Tait, an Atlas Air pilot who has flown for the company for two years.
“AAWW has made huge commitments to Amazon even though we’re losing dozens of pilots a month and are not able to replace them.
“We urge Amazon investors and executives to heed the voices of those on the frontlines, and encourage its contracted carriers to help build a successful partnership that works for customers, pilots and our businesses alike.”
Concerns about the future of Prime Air were also voiced in a letter sent to the Amazon board from the International Brotherhood of Teamsters general secretary-treasurer, Ken Hall.
“The letter asserts that a tightening pilot supply and looming operational risks at Amazon’s cargo contractors should be of concern to board members and encourages the company to work with pilots and the union on solutions to these challenges,” the union said in a statement.
The protests come as unions are currently at loggerheads with ATSG and Atlas over collective agreements, with pilots accusing the airlines of offering below industry standard pay and conditions.
Last week, the US National Mediation Board has ruled in favour of ATSG’s subsidiaries, in determining that they do not operate as a single transportation system, as defined under the US Railway Labor Act, for purposes of the labor representation of their pilot employees.
Two unions contended that ATSG had operated the two subsidiary cargo airlines, ABX Air (ABX) and Air Transport International (ATI), “as a single transportation system while maintaining a facade of two separate carriers”.

In response to the ruling, Rick Ziebarth of ABX Air, who is executive council chairman at the Airline Pilots Association Local 1224 said: “It is still in the best interest of shareholders to streamline our operations. And while we are disappointed with the board’s decision, we will continue working to address this issue in negotiations.”
Strikes related to the case grounded Amazon flights for a day at the end of last year.
In December, Atlas said talks with unions were ongoing after a pilot survey carried by pilot associations and unions revealed that many are concerned about recruitment of colleagues and how the new contract may look.
The survey carried out by Airline Professionals Association, Teamsters Local 1224, showed that 69% of 893 pilots at Atlas completely disagreed that the airline had enough pilots to meet the long-term needs of customers DHL and Amazon.
The pilots have also taken their concerns over pay related to DHL flying to US president Donald Trump.