American Airlines is Cargo Airline of the Year 2015 American Airlines is the 2015 Cargo Airline of the Year.
The presentation was made to Jim Butler, president, American Airlines Cargo, at a sparkling Air Cargo News gala event in London. Butler was presented with the award by Mark Whitehead, chief executive of Hong Kong Air Cargo Terminals Ltd (Hactl), the category sponsor.
Larry Coyne received the Lifetime achievement award from Jon Conway, Senior Divisional Vice President of the sponsor, Dnata.
More than 400 people attended the Air Cargo News awards, hosted by Gyles Brandreth, held at the Lancaster London Hotel.
Tokyo Haneda Airport in Japan was the best cargo airport of more than one million tonnes – one of two awards sponsored by IATA – based on the highest percentage increase in volumes according to Airports Council International’s data.
Dubai World Central in the UAE was the best cargo airport of less than one million tonnes category.
Global freight forwarder of the year – sponsored by Virgin Atlantic Cargo, was Panalpina, while the ground handler of the year –sponsored by Saudia Cargo – was Dnata.
Air Charter Service was cargo charter broker of the year in a category sponsored by Aviation Solutions, while Airbridge International Agencies picked up the GSSA award, sponsored by American Airlines Cargo.
Best African airline – sponsored by WCA – was Kenya Airways, while American Airlines Cargo was the best carrier in the Americas, a category sponsored by Exelsius. Cathay Pacific picked up the airline award for the Asia/Pacific region, sponsored by Air Cargo Partners Worldwide.
Lufthansa Cargo was the best European airline, a category sponsored by Air Charter Service, while Etihad Cargo collected the top Middle East carrier from sponsor Quick Cargo Service.
AirBridgeCargo Airlines was the winner of the best all-cargo carrier, an award sponsored by Liege Airport. 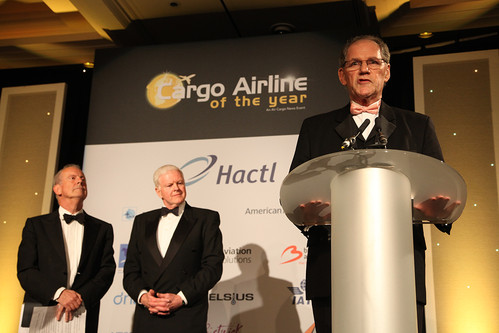 L-R: Gyles Brandreth, Jon Conway and Larry Coyne
A full report on the awards will appear in the next issue of Air Cargo News, while photographs from the event are now available online in the gallery.