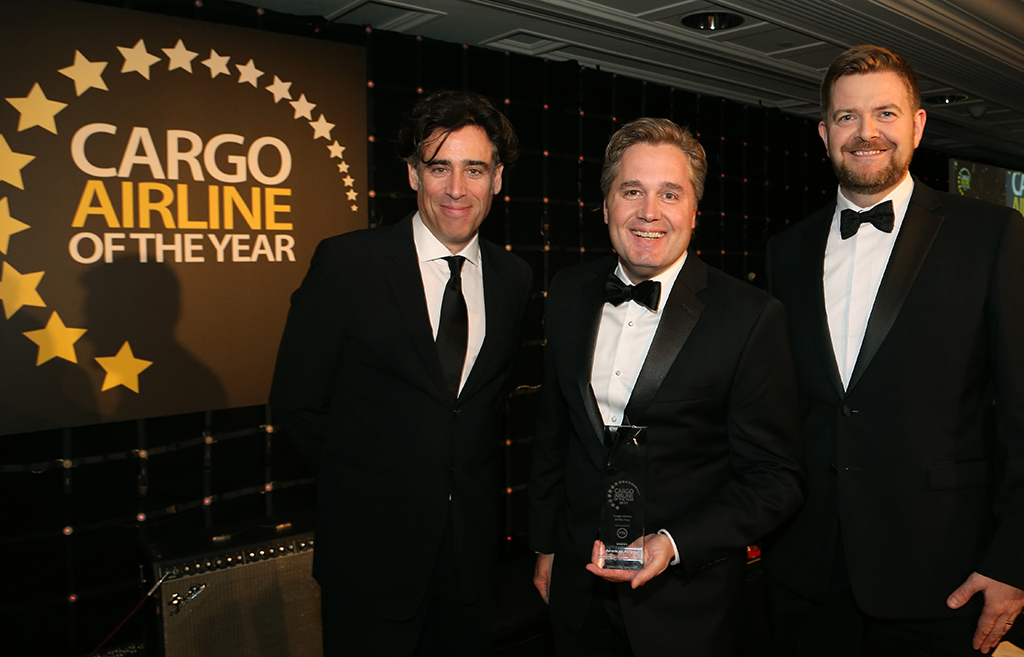 American Airlines was voted Cargo Airline of the Year 2017 as airfreight’s shining stars took centre stage at Air Cargo News’ industry Oscars, now in their 34th year.
American Airlines, doubly successful on the night with a regional Americas garland, secured the highest total number of votes cast by Air Cargo News readers to retain its top spot on the podium for the third successive year.
Rick Elieson, president-cargo of American Airlines, accepted the Cargo Airline of the Year award, sponsored by the Freight Transport Association (FTA), from Kevin Green, director of marketing communications.
Elieson said: “This is a very humbling moment for us and I am also very proud of the team at American, which works every day to earn your business and to earn your trust but we are by no means content.
“We will maintain record investments this year to improve the service we deliver. Some of you will know that I am new to cargo, and evenings like this show me why we are so passionate about this business. Thank you very much for the honour. ”
American Airlines, which recently appointed Elieson in his new role, saw cargo demand grow rapidly last year as it expanded its network in Europe and Asia and began taking delivery of an order for 20 Boeing 787-9 aircraft, while also investing in automation to improve the customer experience.
The glittering Lancaster London Hotel event was presented by comedy actor Stephen Mangan who entertained the audience of more than 300 people with gentle humour aimed at his own success, as winner of the UK’s celebrity Mastermind, and also the funnier side of our global industry.
A total of 14 categories featured in the 2017 Cargo Airline of the Year awards, based on a mix of direct voting by more than 18,000 supply chain professionals, company submissions, and two awards within the gift of the editorial team at Air Cargo News.
Shippers, freight forwarders and other industry sectors were asked to vote on the Air Cargo News website, over a two month period, for the airline that provides the best overall customer experience and service provider in each region.