ANA takes delivery of first B787-9 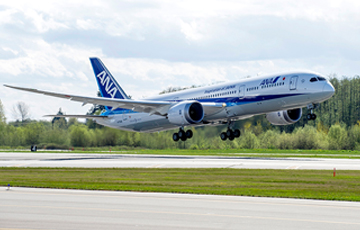 JAPANESE airline All Nippon Airways (ANA) has taken delivery of its first B787-9 Dreamliner.
ANA becomes the world’s first airline to operate both the -8 and -9 variants of the Dreamliner family when it launches B787-9 services on domestic Japanese routes in August.
“The B787 Dreamliner is a key element in our growth strategy and we are proud to be the first airline to fly both models of the family,” says Osamu Shinobe, ANA’s president.
“The new -9 will build on the exceptional efficiency of the -8 and will allow us to meet growing demand that is anticipated ahead of the 2020 Tokyo Summer Olympics.”
With this delivery, ANA will have 29 B787s in its fleet, more than any other operator in the world.
The -9 complements and extends the B787 family. With the fuselage stretched by 20 feet (six meters) over the -8, the -9 can carry up to 40 more passengers an additional 450 nautical miles (830 kilometers) with the same environmental performance – 20 per cent less fuel use and 20 per cent fewer emissions than similarly-sized aircraft, Boeing points out.
ANA has 29 more B787-9s on order with commitments for 14 more.