Global air freight tonne kilometres (FTKs) rose 8.5% in April 2017 compared to last year, said IATA in its latest figures.
While this was down from March’s 13.4% year-on-year growth, it is well above the average annual growth rate of 3.5% over the past five years.
Meanwhile, growth in freight capacity, measured in available freight tonne kilometers (AFTKs), slowed to 3.9% in April 2017.
IATA added that business confidence remained “consistently upbeat” which suggested that year-on-year FTK growth will remain robust for the rest of the second quarter.
There are, however, signs that the cyclical growth peak for air cargo has passed. The inventory-to-sales ratio stopped falling at the end of last year; air cargo demand often gets a boost when an economic upturn starts as companies restock inventories quickly which then tapers off.
But over the whole year, airfreight is headed for a healthy growth of 7.5%, supported by strong pharmaceuticals and e-commerce, IATA points out.
IATA director general and chief executive, Alexandre de Juniac, said: "Demand eased in April. Growth rates, however, are still much more robust than anything we have seen in the last six years.”
While that was good news, it should not be taken as a message that all is well in air cargo, he warned: “The industry’s antiquated processes need modernisation. With e-air waybill utilisation topping 50% in April, progress is being made. And we must harness the momentum to drive transformational change across the way the industry operates.”
All regions, except Latin America, reported year-on-year increases in demand in April 2017 while airlines in Europe and Asia-Pacific accounted for more than 70% of the annual increase in global freight volumes.
North American airlines accounted for much of the rest with Middle Eastern and African carriers also making a positive contribution.
Asia Pacific volumes expanded 8.4% in April, compared to a year earlier, and capacity increased by 3.7%, reflecting the strength of exporters’ order books.
In fact, seasonally-adjusted volumes recently surpassed levels reached following the 2010 post-global financial crisis bounce-back.
North American carriers increased volumes by 7.3% in April 2017, and there was a capacity increase of 2.1%.
Seasonally-adjusted volumes jumped in April, but it is too soon to tell if this is the start of a lasting pick up. The strong US dollar continues to boost the inbound freight but is keeping exports under pressure.
European airlines volume rose 12.9% in April and a capacity increase of 6.9% – a slight slowdown from March but still well above the five-year average of 3.5%. International volume grew 13.1% year-on-year. The ongoing weakness of the Euro is still boosting export orders.
Middle Eastern year-on-year volume increased 3.1% in April 2017, sharply down from March’s 16.3% rise – probably because of last year’s volatile monthly developments rather than a pronounced downturn. Demand remains strong between the Middle East and Europe but traffic to Asia has weakened.
Latin American demand contracted by 1.9% in April 2017 compared to 2016 while capacity decreased by 0.2%. Recovery in seasonally-adjusted volumes also stalled, with demand in April nudging a seven-year low. It is now 18% below the 2014 peak.
African carriers posted the largest year-on-year increase in demand of all regions in April 2017 with volume up 26% and capacity increasing by 17.7%. There has been very strong growth to and from Asia, up nearly 55% so far this year, although load factors remain-the lowest of all regions.
Click on image for interactive chart 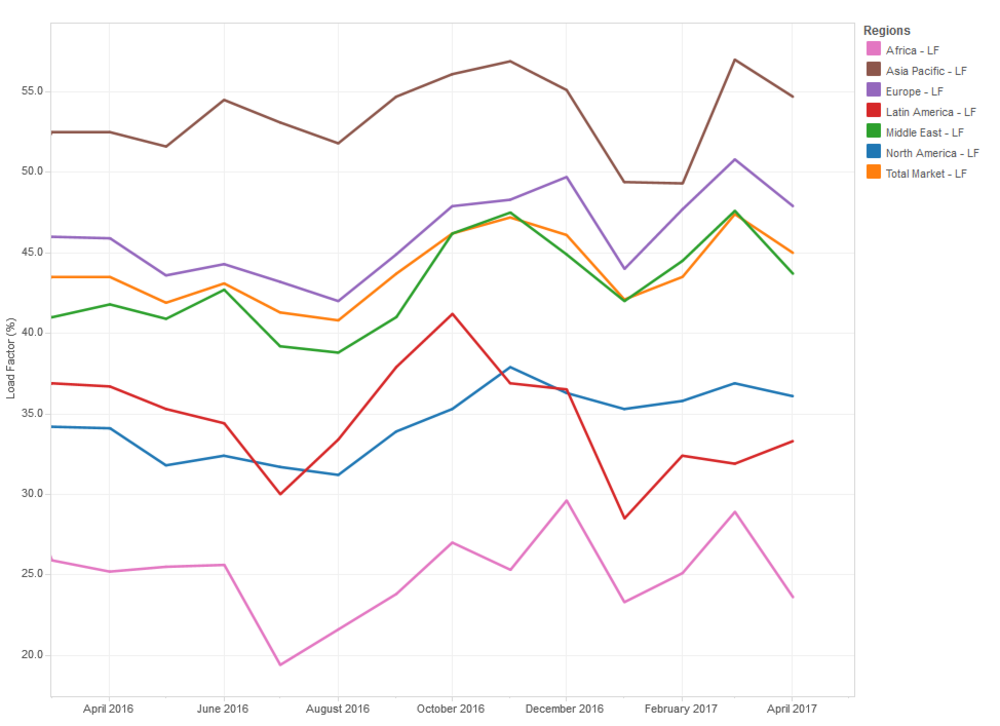