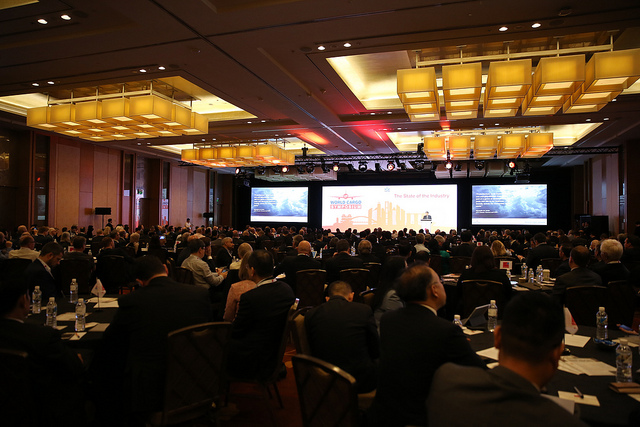 Speaking at the World Cargo Symposium, IATA chief economist Brian Pearce painted a bleak picture for air cargo in Asia over the next few months.

He said the US-China trade war had already put pressure on the region. The intra-Asia region saw demand decrease by 5% year on year in January, while at Asian carriers there was a 3.6% decline.

He said the drop off in intra-Asia cargo volumes reflected a decline in components being exported to China for assembly lines as exports across the transpacific declined.

Pearce said: “It is true that the situation is going to get worse before it gets better. I think we know this just because of the export orders that are in the pipeline.

“We can see that the export order numbers are down and they lead what we see in air cargo by two or three months.

“The last [export order] figures in February were down at their lowest level at least since 2016 so that would suggest to me that the next couple of months we are going to see a further decline in air cargo volumes.”

He said that IATA has predicted global growth of 2% this year, but Asia is expected to lag behind.

However, he was more positive looking to the future, pointing out that China continues to inject money into the economy to stimulate growth.

“The expectation amongst the economic forecasts is not that we are facing a crisis here. In terms of where the trend is going in this region, it seems to be pretty positive for most economies.”

Bloeman said that 50% of airfreight between China and the US is currently subject to tariffs and if a deal cannot be struck between the two countries, this could to increase to 100%.

“So, what have companies done in terms of moving away from China to other gateways?” he questioned.

Singapore Airlines senior vice president of cargo Chin Yau Seng said that the airline had noticed the impact of the trade war in its January and February numbers, but it is hopeful a resolution can be found.

“In the meantime, as a result of the uncertainty and the concerns over the tariffs, there has indeed been some movement of [manufacturing] activities coming out of China into the likes of Southeast Asia countries like Vietnam, Thailand, Malaysia,” said Seng.

“China is a huge manufacturing centre and you can’t expect a big chunk of it to move overnight – supply chains cannot adjust that quickly.

“What we have seen is that where companies were already thinking of moving manufacturing from China, that case has picked up as a result of the situation.

“Fortunately, we have a strong presence in Southeast Asia so we are benefitting from some of those moves even though this is coming at the expense of some of the China traffic.”

Vietjet Air vice president of cargo Do Xuan Quang agreed that manufacturers had been increasing their use of Vietnam, in particular high-tech firms, Japanese companies and some US retailers.

However, he was concerned that the US could introduce tariffs on Vietnam in order to address the trade imbalance there.

Herdman said: “People are diversifying their risk in terms of where they are sourcing as they look at making their supply chains more resilient.

“From an air cargo perspective, we have to respond to that. We have assets that are moveable, but you need traffic rights, you need support on the ground, you need logistics, you need market contacts so you need to cultivate those.”

He also said that even if there is a resolution to the US-China trade dispute it could be temporary and may only cover certain sectors and pointed out that the US had started trade wars with a number of other countries.