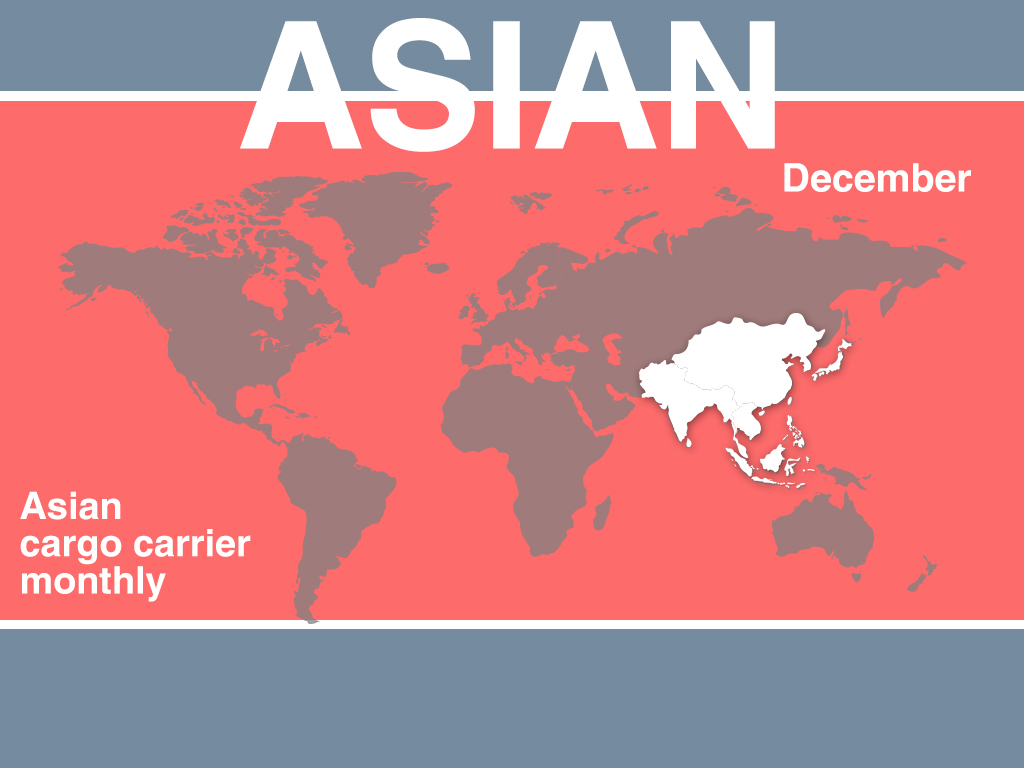 Asian airlines saw their cargo traffic increase in 2018 despite a tough end of the year for many of the region’s largest carriers.
The Cathay Pacific Group continued to see its air cargo traffic improve in 2018 as demand was up by 4.2% year on year to 12.1bn revenue freight tonne kms.
This is the airline groups’ most successful year for cargo since at least 2011, when Air Cargo News records begin.
However, taking the polish of the achievement slightly is the slowdown in growth as the year drew to a close – in December the company registered a year-on-year decline of 5.9% in December.
Cathay Pacific director commercial and cargo Ronald Lam said: “We finished the year-end peak with strong movements of cargo in the weeks leading up to Christmas and demand slowed down towards the end of the month. Uncertainty remains in the coming months regarding the trade situation between China and the US.”
This performance is reflected by some of the figures released by analysts in November, when traffic between China and the US took a hit as a result of the trade tariff standoff between the two countries.
Capacity additions also led to its average load factor for the year declining to 67.7% from 68.8% last year.
Click on chart for interactive version

Another of the region’s largest cargo carriers, Air China, saw cargo demand increase by 5.8% last year to 8bn revenue freight tonne kms, led by international traffic.
While the airline noted growth, the year-on-year percentage improvement was the lowest the airline has recorded since 2012. It also saw its average load factor for the year decline to 56.1% against 56.7% in 2017.
The airline also saw traffic growth decrease as the year progressed – the last three months of the year saw lower growth than any of the other previous three quarterly periods.
Recording the largest percentage increase was China Southern, which reported a cargo traffic increase of 7.1% year on year to 7.5bn revenue freight tonne kms, again led by international demand.
This was the airline’s best year for cargo, although the pace of growth was down on 2017 levels and its load factor slipped to 52% from 53.6% in 2017.
Unlike Cathay Pacific and Air China, December ended up being quite a busy month for China Southern with cargo traffic improving by 8.7% year on year.
Singapore Airlines Cargo registered a 0.8% decrease in cargo traffic to 7.1bn freight tonne kms in 2018, which is its first annual decline in traffic since 2014. Its cargo load factor for the year stood at 63.5% compared with 65.4% in 2017.
Growth weakened towards the end of the year, culminating in a 5% decline in traffic in December.
In Taiwan, China Airlines registered an improvement in freight revenue tonne kms of 2.9% to 5.9bn for 2018, while December registered a 0.2% decline. Eva Air was down 0.8% to 3.7bn revenue tonne kms for the year and December saw a decline of 6.3%.
Both airlines’ cargo revenues surged ahead despite market growth slowing compared with 2017 levels – Eva Air saw its revenues improve by 11.3% and China Airlines’ was up by 15%.