Asian carriers began to see air cargo traffic pick up in October as the industry enters the peak season, but fast growing Air China recorded its first year-on-year demand decline since 2013.
The latest monthly statistics from Asian airlines shows all but one of the carriers saw demand pick up in October compared with September, although in most cases load factors continued to decline against a year ago. 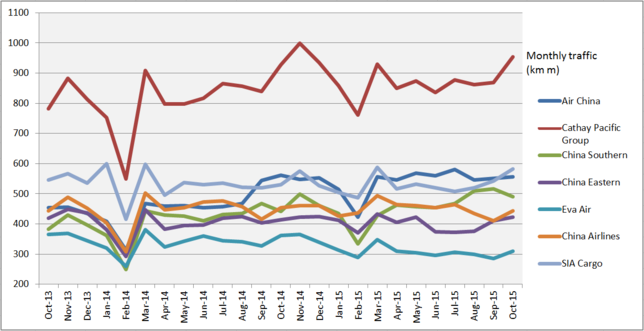 Notes: Eva/SIA = FTK; Air China/China Airlines/ Southern/Eastern = RFTK; Cathay = CMRTK
The most surprising demand figures came from fast-expanding Air China which saw demand slide by 0.7% year on year to 557m revenue freight tonne km.
This is the first year-on-year decline the carrier has recorded since February 2013 and follows on from a 1.3% increase in September.
For the rest of the year, the carrier has been recording double-digit year-on-year increases in cargo demand while monthly capacity has been up by 20% or more.
However, these capacity increases also began to ease off in September and are now just over the 10% mark.
The increases come as Air China Cargo took delivery of two Boeing777-200Fs in the summer, which swelled its all-cargo line-up to eight 777s, three 747-400Fs and four Boeing 757-200Fs, used chiefly to provide domestic linehaul for China Post.
The 747 freighters are deployed on intra-regional sectors and for charter work, whereas the 777s serve the carrier’s trunk routes to Europe and North America.
Air China’s longhaul network has seen a significant shift. By the end of the summer lift to Europe had been cut back 30% to five weekly frequencies each to Frankfurt and Amsterdam, whereas frequency to the US went up 45% to 16 weekly frequencies altogether.
Meanwhile, the carrier has also been rapidly expanding belly space this year with the addition of new passenger aircraft.
The region’s busiest cargo carrier Cathay Pacific reported an uplift in demand in October in line with the peak season.
Cathay Pacific general manager cargo sales & marketing Mark Sutch said: “Demand for airfreight shipments continued to climb as we moved into the traditional peak period.
“We moved to a full freighter schedule as traffic on the transpacific routes increased and demand to and from India continued to strengthen.
“Our teams worked hard to push up the load factor for both freighters and passenger aircraft belly space; however, overcapacity in the market continued to put pressure on yield. Current indications are that this year’s cargo peak will run through until the end of November.” 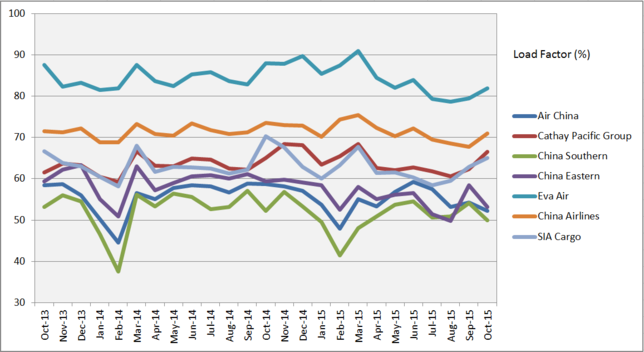 The only carrier that didn’t record a month-on-month increase in demand in line with the peak season was China Southern, although September tends to be a strong month for the airline. Expectations are volumes will continue to ramp up at Asian carriers in November, as this tends to be their busiest month of the year.
Compared with last year, Cathay’s cargo volumes continued to record low single-digit increases, in October it saw a 2.9% jump, while it increased cargo capacity by 0.8% on a year earlier.
As a result, load factor increased to 66.5% compared with 65.1% in October last year.
China Southern, which along with Air China has been growing rapidly, recorded a year-on-year demand increase of 11.3%, while capacity was up 16.2%.
As a result, its cargo load factor for October slid to 50% from 52.2% last year. The carrier’s rapid growth has been put down to the addition of four B777 freighters, targeting mail, fresh goods and e-commerce and enhanced co-operation with domestic express companies.
China Eastern meanwhile saw load factors decline as a result of an upsurge in capacity of 14.2% compared with October last year.
For most of 2015, its capacity has been increasing by around the 5% mark. While supply took off in October, demand continued to increase at a similar pace to the rest of the year, increasing by 2.3% on last year, and as a result its cargo load factor tumbled from 59.4% to 53.2%.
Taiwan’s China Airlines recorded a year-on-year demand decline in October for the fifth month in a row as demand slid 2.2% on a year earlier.
In contrast, supply was up by 4.1% year on year and as a result its cargo load factor declined to 71% from 73.6% a year ago.
Eva Air recorded the largest year-on-year decline in demand in October as traffic slipped by 14.4%, while cargo capacity was down by 7.8% and its load factor was down to 81.9% from 88% last year.
The decline in demand was roughly in line with its performance for the rest of the year as it reduces capacity.
Finally, Singapore Airlines Cargo recorded its second largest increase of the year, with demand jumping by 9.8% on a year earlier. Supply was up by 9.1%, its largest increase of the year, meaning it managed to increase load factor to 65% from 64.6%.
It said its cargo load factor improved for east Asia, south west Pacific and west Asia & Africa as demand outpaced capacity changes. 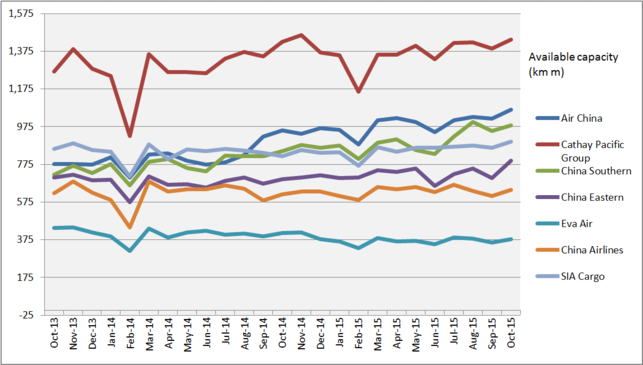