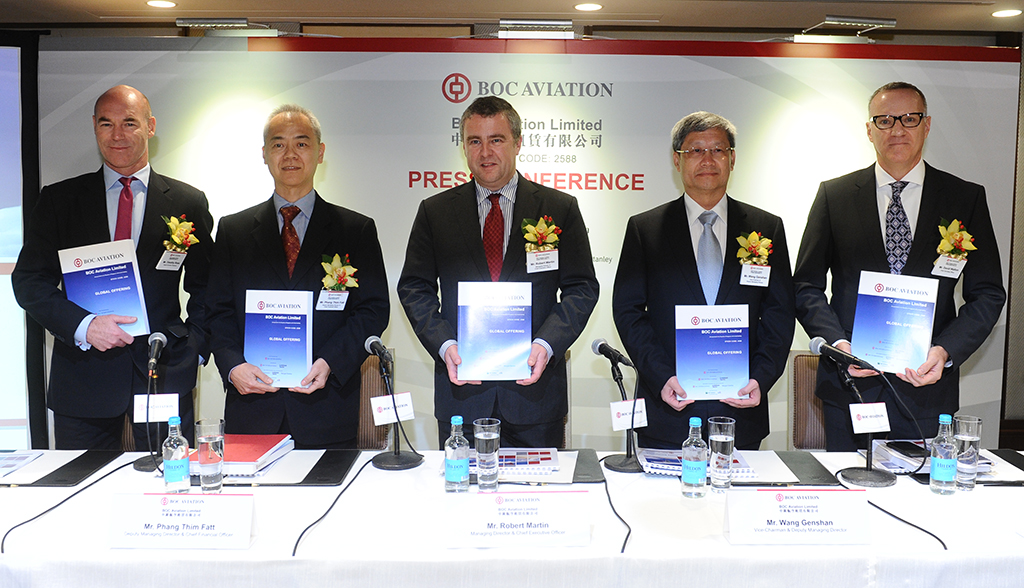 Aircraft lessor BOC Aviation is to list its shares on the main board of the Hong Kong Stock Exchange after launching a US$1.1bn initial public offering (IPO).
The HK$42.00 price per share will raise net proceeds of approximately US$547m for Singapore-based BOC Aviation and a similar amount for Bank of China, which has been a 100% owner of the aircraft lessor since December 2006.
BOC Aviation is the largest Asian-headquartered aircraft operating leasing company, with a fleet of 270 aircraft, including seven Boeing 747 freighters, of which three are owned and four are managed.
The company is expected to debut on the Hong Kong stock exchange on June 1 after 11 cornerstone investors, including Boeing, agreed to buy 52% of the shares being offered. The US plane-maker’s investment is non-commercial meaning it won’t affect any commercial relationships.
The likely reason for Boeing investing in a lessor is that it wants to send the message that it sees the Asian market as very important.
The BOC Aviation IPO was the second by an Asian lessor after China Aircraft Leasing Group Holdings.
Robert Martin, managing director, chief executive and executive director of BOC Aviation, said:  “In the next 20 years, the global fleet of aircraft with more than 100 seats is estimated to exceed 39,000 aircraft, compared with just over 19,000 today as growth in appetite for travel, especially from emerging markets, drives demand from airlines for more aircraft.
“The aircraft leasing industry’s future is promising and our business model is underpinned by strong global trends in the aviation industry. Leveraging these widespread market opportunities, we will endeavour to strengthen the leading position in the aircraft leasing industry that we have established over the last 22 years.
“We are committed to building on this track record to consolidate our position as one of the world’s most competitive aircraft operating lease companies.”
The group’s aircraft are on lease to a diversified customer base of 62 airlines in 30 countries.
Bank of China will retain a substantial majority shareholding of around 65% in BOC Aviation, and the company will remain as a subsidiary of Bank of China and continue to carry its brand name.