Asiana converts A350 to temporary freighter 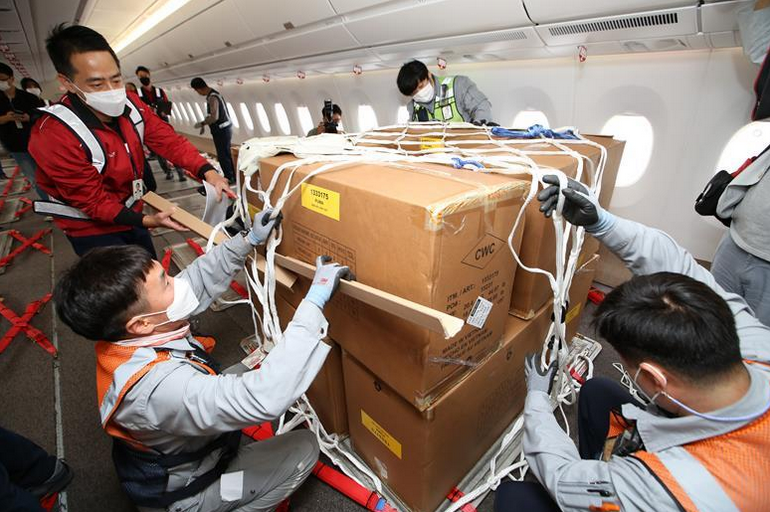 Asiana Airlines has commenced operations with an Airbus A350-900 partially retrofitted as a maindeck freighter, as it plans scenic flights with its grounded A380s.

The A350 renovation work involved removing 283 economy class seats and installing a steel panel on the floor “to ensure safety”, said the carrier.

The company attributed the decision to boosting profitability amid the coronavirus pandemic, which has badly hit passenger traffic.

The modification allows for an additional 5 tonnes of cargo to be carried, bringing the A350’s total cargo load to 23 tonnes, said the carrier. It added that this is the first time an A350 has been converted for freighter work. Cirium fleets data shows that Asiana A350s are configured with 283 economy seats and 28 business class seats.

The modified jet had its first flight on September 23, flying 20 tonnes of IT equipment and electrical parts on the Seoul Incheon-Los Angeles route.

The airline said that Airbus assisted with the work, which has also been approved by the European Aviation Safety Administration (EASA).

In addition, the airline said it has modified a pair of Boeing 777-200ERs to allow them to carry freight in the passenger cabin.

Cargo has been a bright spot for Asiana amid the coronavirus downturn. In August it reported that cargo operations helped it achieve a second-quarter operating profit of W115bn ($140m), compared with a W107bn loss in the same period of 2019.

Separately, the airline is promoting a pair of scenic flights using its A380s. The flights will be operated on 24 and 25 October. They will depart from Seoul Incheon at 11AM for a two-hour flight over South Korean landmarks, including Jeju Island.

As with most Airlines, Asiana has grounded its A380s during the coronavirus pandemic.