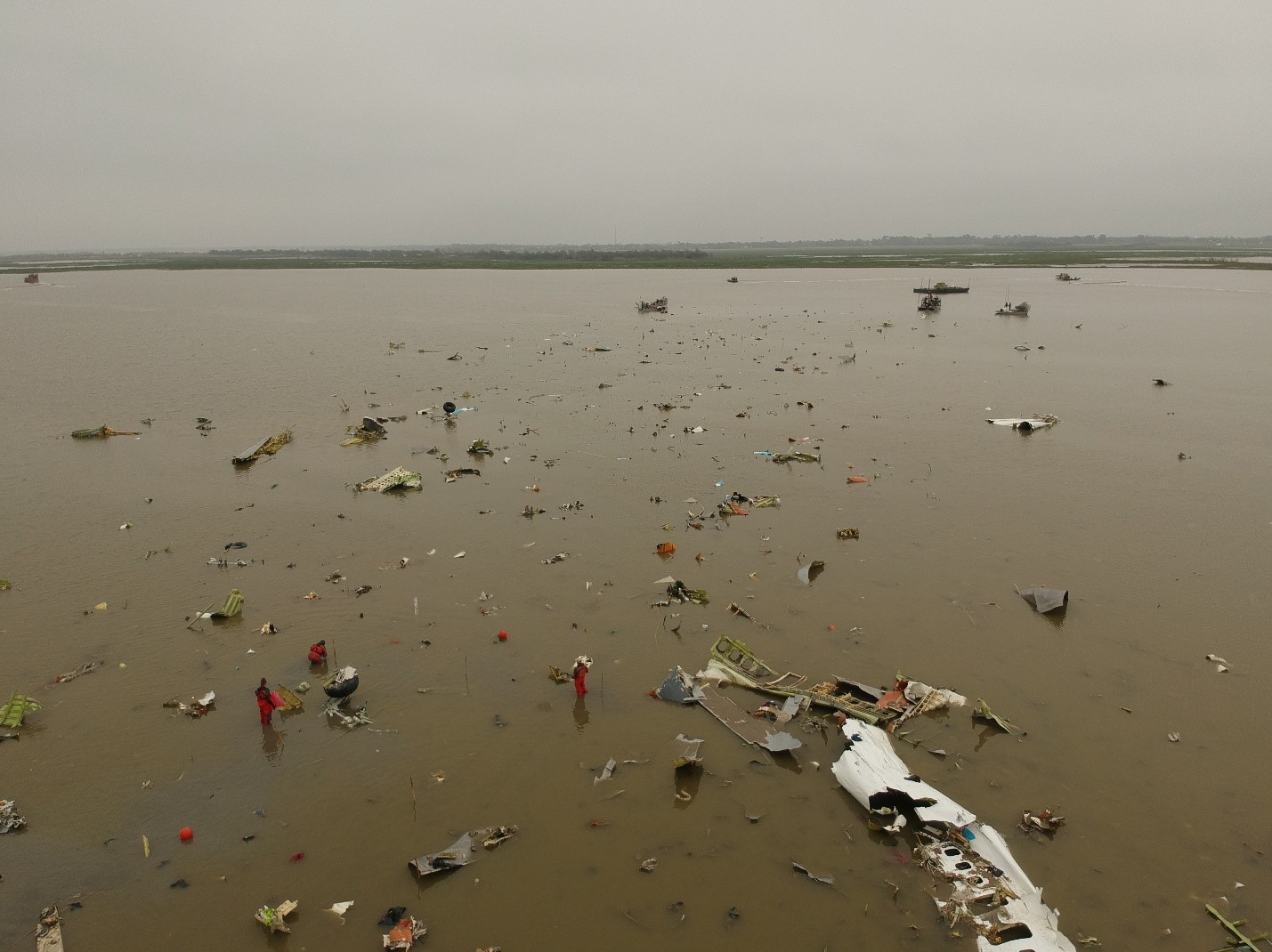 Investigators probing the fatal Atlas Air Boeing 767-300 freighter crash near Houston have been trying to ascertain whether a sound captured on the cockpit-voice recorder signifies the activation of the go-around switch immediately before the accident sequence.

The aircraft, which was flying on behalf of Amazon Air, suddenly entered a steep nose-down attitude and dived into Trinity Bay from around 6,000ft while preparing for an approach to Houston on February 23.

National Transportation Safety Board investigators have released detailed information on the cockpit-voice and flight-data recordings, as well as a spectral analysis of certain sounds in the cockpit.

Cockpit conversation indicates that the flight was progressing normally, with a call to start extending the flaps heard some 60s before the impact.

But just under 30s after this “flaps 1” call, and shortly after the jet encountered moderate turbulence, the recorder picks up the sound of a click, the origin of which has been of particular interest to the inquiry.

The time alignment of the click, it says, matched flight-data recorder information showing activation of the go-around mode.

Spectral analysis has been conducted to try to establish the likely source of the sound. Although the recording quality was poor, investigators have used filtering and detailed comparison with the double-click of a 767 go-around button being pushed and released to try to identify the noise.

The inquiry says the mysterious click on the cockpit recorder “shares a similar characteristic” to the go-around button activation, and that it “could potentially be associated” with the release portion of the double-click.

“However, it cannot be conclusively determined if it is the same sound due to the degraded quality of the [recording] at the time of the sound detection,” it stated.

Accompanying documentation, however, suggests the inquiry is convinced that a go-around switch on the throttle levers was triggered. The accident sequence developed rapidly afterwards.

Simultaneously with the click, the autoflight system entered go-around mode – which had been armed when the flaps were deployed – and the engine thrust began advancing to the go-around setting.

The 767’s control column moved to a forward deflection, with the pitch decreasing and the aircraft accelerating rapidly from 240kt.

Caution alarms began to sound, just 9s after the go-around mode engaged. The inquiry says the control column remained deflected forward for 10s and the aircraft transitioned from a shallow climb to a steep descent.

Five seconds after the alarm commenced, one of the pilots exclaimed, “Whoa”, and shortly afterwards, in an elevated voice: “Where’s my speed, my speed”. Three seconds later, a voice loudly declared: “We’re stalling.”

Flight-data recordings reveal that, during these remarks, the thrust levers were brought to idle for about 2s and then were advanced again to their previous power setting. The aircraft’s pitch rapidly declined and the jet experienced negative g-forces for nearly 11s.

Investigators have disclosed that the recording shows the right and left elevators were split – by 2° to 7° – for some 10s beginning around the point of the “we’re stalling” remark.

The aircraft continued to dive through 2,000ft altitude at which point the flight-data recorder showed the control column being moved full aft until the end of the recording.

Although pitch recovered from 50° nose-down to 16° nose-down, the dive could not be arrested in time and the aircraft struck the water at over 430kt. None of the three occupants survived.

Investigators have yet to draw conclusions over the circumstances and contributing factors to the accident.

Meanwhile, Atlas Air and Amazon.com Services are among the companies named in a lawsuit filed by the brother of one of the pilots, Elliott Aska, killed in the tragic B767 freighter accident earlier this year.