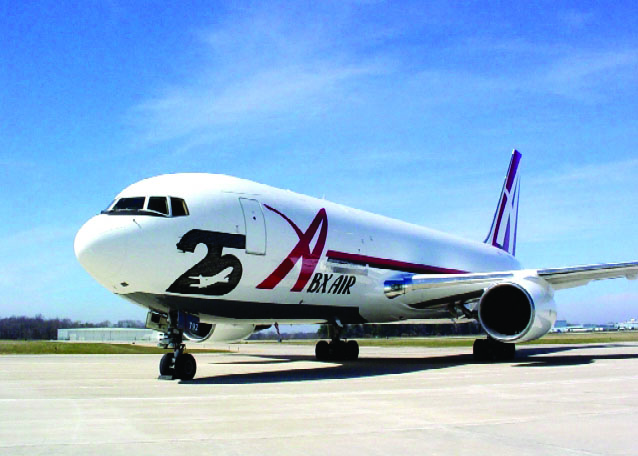 Aircraft lessor ATSG saw adjusted revenues and earnings for the year increase by more than 20% in the final quarter of the year.

The Wilmington-based firm reported a 27% increase in adjusted fourth-quarter revenues to $280.8m, while adjusted earnings from continuing operations were up 23% to $24.1m.

ATSG president and chief executive Joe Hete said that ATSG delivered on its 2018 commitments to meet demand for its freighter aircraft by deploying ten of them during the year, while securing additional assets and businesses to ensure its growth and diversify its customer base far into the future.

Hete said: “Our 2018 Adjusted EBITDA increased 16% to $312.1m, our second straight year of doubledigit growth in that financial metric.

“Our acquisitions of Omni Air and rights to twenty more 767 feedstock aircraft from the fleet of American Airlines, plus the extension and expansion of our agreements with Amazon, have strengthened our platform for sustainable, profitable and diversified growth with some of the world’s largest entities.

“With ninety aircraft in service providing solid incremental returns, we are poised for strong growth in 2019 and superior long-term returns for our shareholders.”

In November, the company purchased Omni Air, which added more than $400m in revenues and gave it access to the B777 platform.

It also extended its deal with Amazon to add 10 more freighters to its current deal for 30 aircraft.

The company also purchased 20 B767-300s sourced via Jetran from the American Airlines fleet to be acquired, converted and leased through 2021 under a December agreement.

Meanwhile, nine B767-300 freighters entered service in 2018, with eight to ten more B767 freighters due in 2019 based on current commitments.

Dry-lease deliveries of B767s to Air Incheon and SkyTaxi in 2018 expanded ATSG’s lease-customer base. Additional leases were also completed with other customers Amerijet, CargoJet and Northern Air Cargo.

Looking to the year ahead, Hete is expecting new and expanded contracts to benefit the company.

He said: “We expect strong returns in 2019 from our work for the Department of Defense, including charter and ACMI passenger services, as well as for our commercial customers, including Amazon and DHL.

“We expect to place eight to ten newly converted 767 freighters in service as dry-leased aircraft this year, including the five we will deploy with Amazon in the second half. We also expect overall stronger results from our ACMI Services segment from the addition of Omni Air.”

ATSG currently projects adjusted EBITDA for 2019 will exceed $445m, reflecting a full year of contributions from Omni Air and from the freighter aircraft deployed during 2018.

Most of the additional cargo aircraft deployments this year will be in the second half.