Delta to the rescue as disaster strikes the Gulf 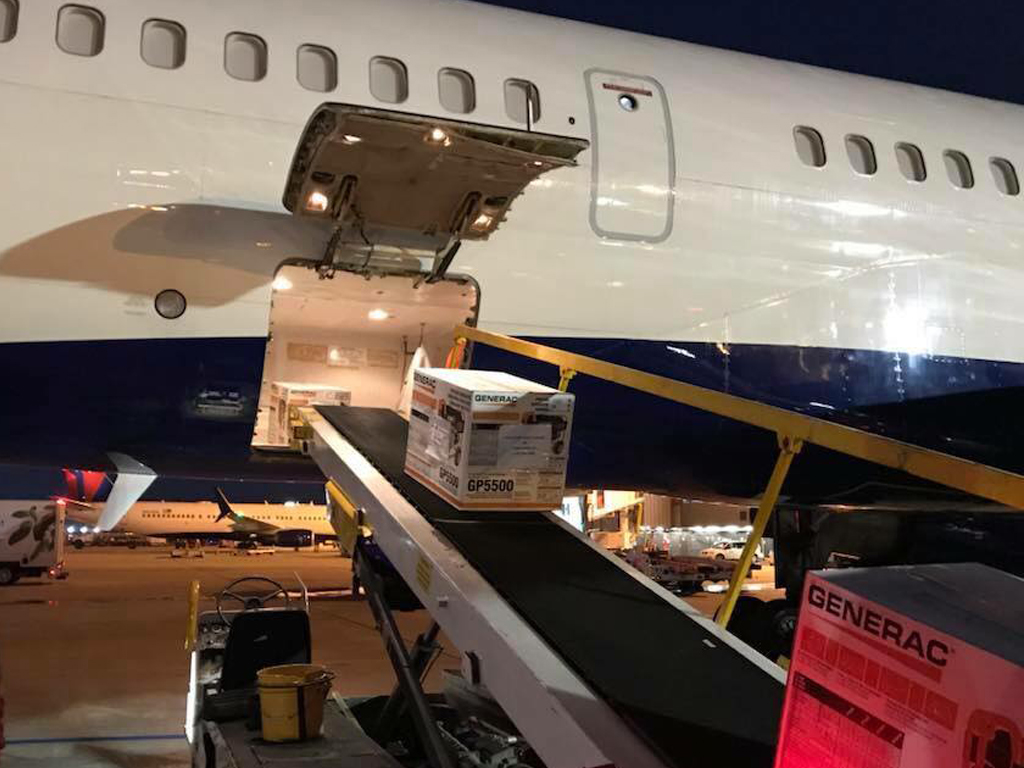 US airline Delta and its employees “have mobilised like never before”, rushing to help people in need after hurricanes devastated large parts of the Gulf coast and Caribbean and earthquakes hit Mexico.
The carrier partnered with the American Red Cross and other experienced non-profit organisations, contributing $3.75 million, operating relief flights filled with thousands of pounds of water, generators, baby food and other supplies; and adding dozens of flights to evacuate tens of thousands of people to safety.
Delta operated two relief flights to the Houston airports after Hurricane Harvey caused historic flooding across southeast Texas. A 737 delivered cots, clothing, paper goods, fresh and non-perishable foods, personal hygiene items, water and hot meals.
Delta added dozens of flights and upsized aircraft to Florida and the Caribbean – as large as the Boeing 747, mostly reserved for international routes – to help evacuate thousands of people before Hurricane Irma hit, in all adding more than 12,000 seats in the days before Irma hit.
It also operated the last flight in and out of Puerto Rico before Hurricane Irma swept through the island, evacuating 173 customers when other airlines had abandoned attempts to fly into San Juan.
Six Delta humanitarian flights flew to Puerto Rico, Turks and Caicos, St. Thomas and St. Maarten, carrying Red Cross staff, volunteers and hundreds of thousands of pounds of supplies including water, satellite phones, batteries, phone chargers and non-perishable food.
As recently as Tuesday 27 September, Delta operated three flights containing 33,000lbs of water, generators, blood, food and other supplies to help people stuck at the San Juan airport and elsewhere in Puerto Rico. Delta’s Cargo team is also coordinating delivery of supplies to Puerto Rico donated by Delta business partners.
Of the many employees who undertook humanitarian efforts as part of outside charities or the US military, Delta singled out Ashley Ivory for her work providing security and assisting law enforcement in Orlando as a member of the Georgia Army National Guard after Irma struck Florida. "It’s a humbling experience to serve my country and our people in times of need, all the while upholding Delta’s values of servant leadership and integrity both within and outside of the workplace," Ivory said.
And after Harvey swamped Houston, pilot Scott Tobias travelled from his Cincinnati home to Houston with a disaster aid group, helping to rescue residents of a retirement home.
After Irma made landfall, Mike Rutigliano and Sean Garell, two New York-based pilots who are part of the New York Air National Guard, took on a mission to rescue Americans stuck in the Caribbean.
Delta’s chief executive officer, Ed Bastian, said: "Delta’s commitment to the people of these communities, and our employees’ deeply ingrained culture of service, means we will work in every way possible to address the humanitarian needs. The people suffering from these terrible disasters are our neighbours, friends and family. We are grateful to have the ability to join in helping to serve the people in need in this time of crisis."