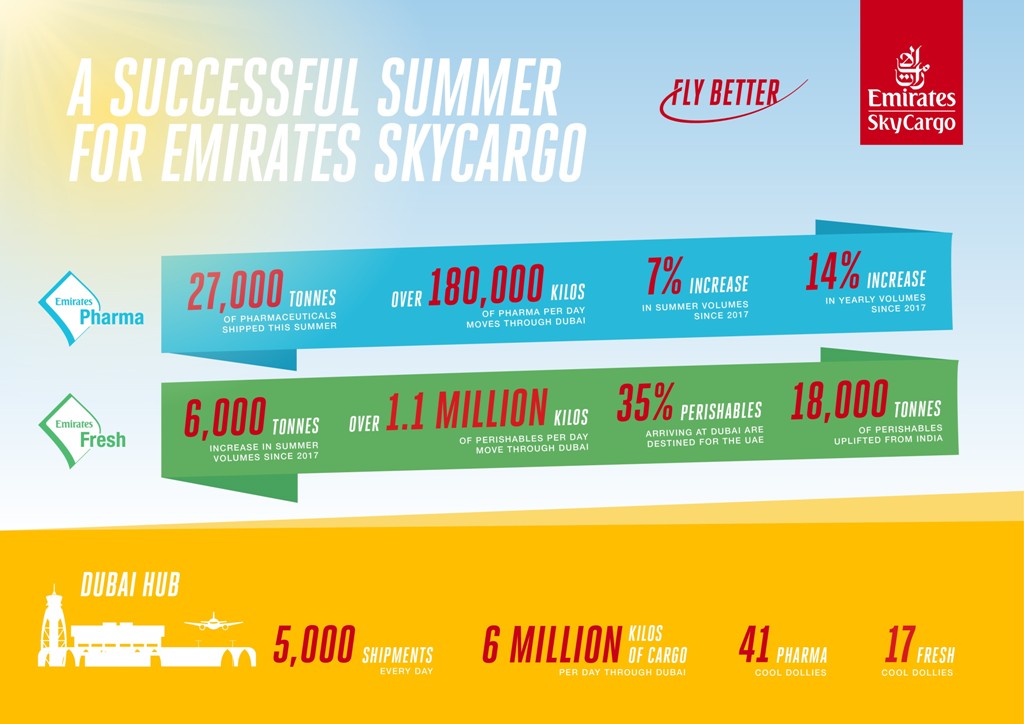 The temperature-sensitive goods, which moved through Dubai to other parts of the Middle East carrier’s global network, were carried from the beginning of April to mid-August 2019.

Said a spokesperson for the cargo arm of Emirates: “Over the last three years, Emirates SkyCargo has managed to consolidate the position of its Dubai hub as an efficient and rapid transit point for cargo originating from and destined to a variety of cities across six continents.

“It has also transformed the perception of Dubai in the minds of global cargo customers from a transit stop to be avoided in summer because of high temperatures to a preferred state of the art point of connection to markets around the world.”

The freighter and bellyhold operator has developed modern and “fit for purpose” cargo terminals at Dubai’s twin airports of DXB and DWC.

The investment includes extensive cool chain facilities and dedicated storage space for pharma goods. With a combined capacity of over 2m tonnes of cargo per annum, the two terminals handle close to 5,000 shipments and over 6,000 tonnes of cargo per day, including during the summer season.

“This summer season alone, over 190,000 kilos of pharma travelled every day through Dubai on Emirates SkyCargo.

“These include lifesaving vaccines, medication for cancer, diabetes and cardiovascular diseases that travel across the world through Dubai to reach patients in time for their treatment.”

The carrier’s operations in Dubai, including the connecting bonded trucking corridor between DXB and DWC, are certified for European Union (EU) Good Distribution Practice (GDP) norms.

Earlier this year, the air cargo carrier inaugurated a new pharma facility at Chicago airport, with the US hub now one of its most important pharma stations globally for both exports and imports.

Added the spokesperson: “Every day, around 1,100 tonnes of food and other perishable products originating from different parts of the world move through Emirates SkyCargo’s terminals in Dubai.

“This summer, there was an increase of close to 6,000 tonnes in the total quantity of perishables passing through Dubai compared to 2017.”

Close to 35% of perishables arriving at Dubai are destined for the UAE with the rest travelling on to reach global consumers.

In 2018, Emirates SkyCargo flew close to 3,000 tonnes of perishables just from Italy to the Middle East, Australia, New Zealand and other destinations in East Asia.

Since the start of its service to Santiago, Chile, Emirates SkyCargo has carried over 4,000 tonnes of Chilean salmon, about 20% of the total volume of salmon exports to Asian destinations.

One of the points of origin for perishables for Emirates SkyCargo is India. Every month, around 4,000 tonnes of fruits, vegetables and other perishables are moved from India by the carrier.

Since May 2019, Emirates SkyCargo has moved 18,000 tonnes of perishables from India alone.

A live roundup of air cargo companies’ efforts to meet the challenges presented to supply chains by the Covid-19 outbreak….