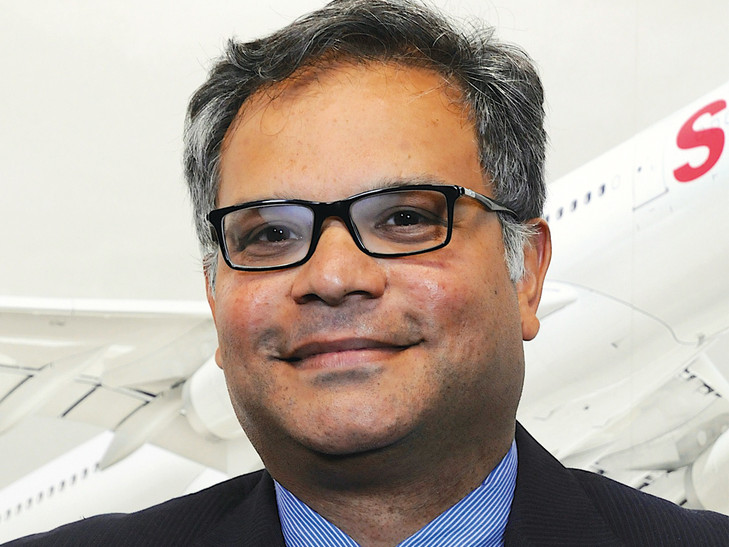 Swiss WorldCargo hopes to further enhance its services for the pharmaceutical and e-commerce industries as it faces up to another year of flat growth for the air cargo industry in 2016.
Head of cargo at Swiss Ashwin Bhat said 2015 was not a good year for the airline’s cargo division in terms of revenues.
He explained revenues were affected by the Swiss National Bank’s decision to remove a Swiss franc currency ceiling based on the value of the euro.
The move caused the franc’s value to drop and as Swiss WorldCargo generating 80% of revenues in foreign currency, the airline’s revenues took a hit.
Lower fuel surcharges and yield declines caused by overcapacity also hit revenues.
Average load factors at the airline also declined, slipping by around two percentage points to 76.8%.
The lower load factor was caused by yields declining to such an extent that Swiss WorldCargo decided to turn away certain business which became unprofitable.
This year the air cargo market has been “flat, flat, flat”, said Bhat, although he added “at least it’s not going down”.
Yet Bhat remains optimistic about the future and said the airline would continue to concentrate on certain growth sectors, such as pharmaceuticals, e-commerce and perishables, where it can generate a profit.
To stay ahead of the competition, it is currently looking at how to further develop its services for these sectors, which could involve forming partnerships, particularly for its e-commerce offering.
Bhat said: “January and February were tough, Chinese New Year was there but nobody saw the usual Chinese pre-New Year demand. Easter is coming soon but there is not much demand.
“[In response to the tough conditions] you have to look at your own opportunities and you have to decide what you want to do in a certain market.
“There is demand but the prices are low in certain segments so you have to pick and choose the segments where you want to play.”
With regards to e-commerce, Bhat said it is already handling e-commerce volumes through the postal cargo it carries.
He said there were no plans for Swiss WorldCargo to become an Amazon or an integrator − it would stick to airport-to-airport operations − but it is looking at how to develop services with partners, although it was too early to discuss exact plans.
“We will remain airport-to-airport so we need partners to do the last mile or the first mile.
“We are also evaluating processes with handling agents to see how we can offer a better service on the ground that can attract e-commerce customers.
“It’s about virtually connecting with each other. We are living in an era of collaboration rather than confrontation so it’s all about how do we together offer a service and supply chain.
“Obviously we won’t start big and launch something all over the world, we will start small, maybe our home market and then take one step after another.”
The airline is also developing its pharma offering. It recently gained Good Distribution Practice (GDP) and IATA’s Centre of Excellence for Independent Validators for Pharmaceutical Handling (CEIV Pharma) certification in Zurich.
Overtime this will be extended to other stations with the aim of achieving certification across the whole network. The carrier is also looking at new container types.
The airline this year will take delivery of six Boeing 777-300ER aircraft, with three more due in 2017.
The B777s offer 25 tonnes of cargo capacity, compared with the 15-18 tonnes of the Airbus 340-300s that they will replace, and improved fuel consumption.
Bhat isn’t too concerned about the impact the added capacity will have on load factors as they will be utilised on capacity constrained routes.
He points out that aircraft currently in use on these routes fly with a utilisation rate of around 80%, sometimes hitting the 90% mark on busier days.
Initially, the aircraft will be deployed to JFK, Boston and Tel Aviv, but this is mainly because these are shorter routes where rotations can be faster and the crew can be rapidly brought up to speed on the new type.
From April these routes will go back to being served by A330s, and the 777s will be flying to Hong Kong, Bangkok, Los Angeles and Sao Paulo.
“We have the customer base, we know our service is appreciated in those markets and it is about putting more boots on the ground and going and talking to the customers.
“We are confident that we will do it [attract extra volumes]. We are not going to sit back.”
Training of the airline’s employees and digitisation are other areas of focus.
Bhat said: “For us the focus is on our people; how do you train them? How do you develop their knowledge?
“Digitisation is another area we are working on at the moment. I know it’s a buzz word but we are investing into our website and will be launching a new version.
“It’s all about data transference to our customers – track and trace, shipment temperature and so on.”