WCS: How to reduce the fire risk from lithium batteries 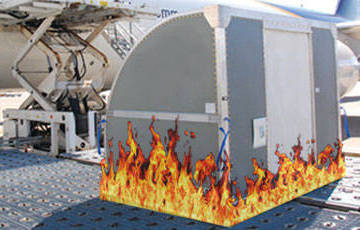 Fires in consignments of lithium batteries have been implicated in the loss of three aircraft over the last 10 years, writes Martin Roebuck.
Peter Hunt, airline ground safety manager at Cathay Pacific, told the World Cargo Symposium (WCS) in Shanghai about risk mitigation measures the airline is taking to make sure it is not the next “smoking hole in the ground”.
Hunt said that 5.5bn lithium batteries were produced in 2013, 86 per cent of them lithium ion and the remainder the lithium metal type. “It’s a $10bn market and it’s not going to go away. We’ve got to make the risk as low as possible,” he urged.
Halon-based aircraft fire suppressant systems will extinguish lithium ion battery fires but are less effective against lithium metal batteries. Cathay ceased carrying bulk shipments of the latter soon after the UPS crash in the UAE in 2010, but has continued like most of its competitors to carry the lower-risk lithium ion type.
Airlines that had banned carriage of lithium ion batteries in the last few days were not responding to new scientific knowledge but to adverse public opinion following prominent media coverage, Hunt said.
X-ray scanners are able to identify lithium batteries and Cathay will search passenger baggage where unusual quantities of these are spotted. The carrier is pulling out 25,000 batteries every month, sometimes several hundred at a time.
Hunt recalled that one passenger had tried to board a plane with no fewer than 10,000 e-cigarettes.
Showing dramatic images of the aftermath of fires in carry-on luggage, cargo holds and on the ground in sorting facilities – even occasionally during the x-ray process itself – he commented that batteries sourced cheaply over the internet were unlikely to have been designed, manufactured, shipped and packaged in line with international regulations.
Some accidents were just that – accidental. But in other cases, vendors had failed to declare the presence of batteries in general cargo, had deliberately understated the watt-hour rating of batteries to make shipments appear legal, or had placed them in mail bags “against all regulations”.
Hunt said: “Mail is a huge problem and one of the more difficult to solve because small suppliers are sending shipments to private customers. How do we ensure that postal authorities – the ones that do allow this and those that don’t – screen them out?”
When Cathay first approached Hong Kong Post over this issue, it initially denied there was a problem. “In 20 minutes my boss and I pulled out 20 high-risk mail bags. Now they’re screening suspect bags, putting packages through one by one, and opening them where necessary,” he said.
“It’s a colossal task. Are they capturing everything? No, but they have much greater awareness.”
Where cargo shippers are regularly falling foul of the rules, Hunt said: “We prefer to work with them rather than ban them, as otherwise a new company starts up and they will work around the embargo.”
By adopting an intelligence-led approach, Cathay is learning which trade lanes are experiencing the greatest problems with rogue batteries.
Hunt said e-commerce platforms must “take ownership of content on their sites” and accept more responsibility, though he confessed he was not sure how this source could be choked off.
“But it can’t just be one airline. We need to share intelligence and tell each other ‘this happened’ – we don’t have to reveal full details. We must work with battery manufacturers and shippers, and prosecute deliberate offenders.”
Did you find this article of interest, if so why not register for a FREE digital subscription to Air Cargo News? – Find out more

Saudi Arabian Logistics (SAL) has started operating customs security areas across most of Saudi Arabia’s airports. It is hoped the…

Airforwarders Association: Is the forwarding industry ready for a Covid-19 vaccine?

In the second article of a new column series from the Airforwarders Association, executive director Brandon Fried outlines outlines how…

Air cargo has not only been a lifeline for the financially-troubled aviation sector, it has also acted as a lifeline…