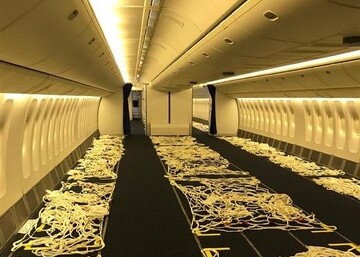 British Airways (BA) is the latest airline to remove the seats from one of its passenger aircraft in order to boost cargo carrying capacity.

The IAG-owned airline said that it had removed the seats and stripped the interiors of two of its grounded 777-200 fleet so that the aircraft can operate as freighters. The aircraft that have had their seats removed are G-YMMK and G-YMMG.

“The aircraft will also be used to carry other essential goods like food and medicine to the UK where required, alongside regular commercial shipments,” BA said in a statement.

“With demand for passenger travel still very low, working with IAG Cargo, British Airways is trying to use its grounded aircraft in creative ways to support in the global fight against Covid-19,” it added.

“In March, the airline began operating cargo-only services with no passengers, carrying cargo solely in the hold. In April, British Airways started carrying cargo on its seats, while these recent changes – removing all passenger seats and stripping the interiors – will mean these aircraft now have space for an extra 100 cu m of cargo on each flight.”

BA and sister firm IAG Cargo have operated more than 80 cargo charter flights carrying tonnes of PPE and ventilators for the NHS, in partnership with the UK government.

BA is not the first airline to remove the seats from passenger aircraft in order to boost cargo capacity. However, the cost of the removing and replacing the seats and the question over how sustainable cargo-only passenger are in the long term is putting others off.