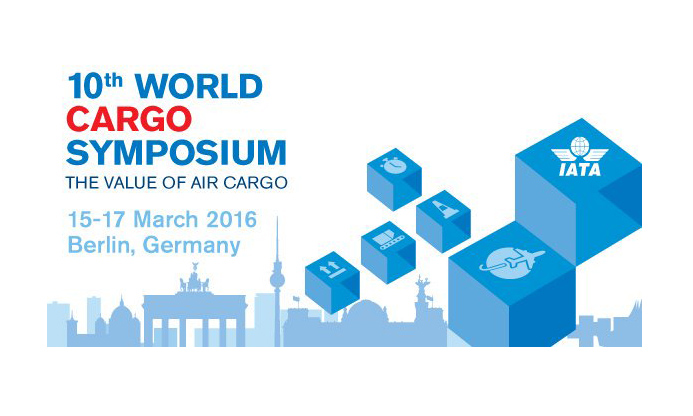 Berlin is the host city for the 10th World Cargo Symposium, March 15-17, and the ‘value of air cargo’ will be the conference theme at the InterContinental Hotel venue.
Glyn Hughes, IATA’s global head of cargo, said that the industry needs to make better use of cargo data, with a focus on the end customer, while also tackling its low profile by highlighting the important role it still plays in driving the global economy.
“In Berlin we want to showcase what is going well. The core value proposition of air cargo is still about transporting high-value goods that are time definite or sensitive, as well as those that are patient safety related, for example pharmaceuticals.”
While acknowledging that the year has not started particularly well, and that 2016 will be “another challenging year” for air cargo, Hughes wants the industry to accentuate the positive.
“Rather than going into its shell and saying that the end of the world is nigh we think it is time for the air cargo industry to say yes, we see challenges, but the value proposition of air cargo is as strong now as it has ever been. We can get the goods to market in a timely, quality-led and efficient manner.”
Hughes recognises that airfreight processes need greater transparency, predictability and reliability, requiring “quite dramatic change”.
He said: “We know that the consumers of today are increasingly demanding greater speed to market, and therefore air cargo is well positioned if we can get some of our internal infrastructure challenges addressed.”
The IATA Cargo boss, who took on the role in mid-2014, said that the industry has “gone beyond incremental change” and needs to do more than removing paper processes with greater use of the electronic air waybill (e-AWB).
“It is really only the start. If we cannot as an industry remove that first piece of paper then everything else that we need to do is impossible to achieve.  It is that first small step, but the longer term vision is to go fully electronic which is about removing paper from the whole supply chain.
“And then going beyond that: how can you use the data in a far more proactive fashion?”
Hughes said that the current paper-based linear approach, a peer to peer data exchange with the next link in the chain, needs to change
He added: “When we go to the e-AWB or messaging peer to peer, you are still sending the information to the next party in the chain.
“But it still does not let people throughout the entire supply chain respond around that data. We are advocating the third phase which is when you go to information exchange via information repositories or cloud computing.”
He said that the use of data loggers by shippers in the pharma sector, where units are placed in the ULD to monitor temperature regimes and other aspects, is one example where the “information that the shippers have about their commodity exceeds the information that the transportation providers have on that same commodity”.
Hughes continued: “When a consignment is received at destination, the consignee connects the data logger to a computer and analyses the information.
“He then discovers that the shipment suffered a temperature excursion: information that the shipper should not be hearing for the first time, at the destination.
“So we need to embrace technology and own the commodity all the way through the supply chain where we can track it, the same as we do passengers on a plane.”
Ground handling, and the data locked in that part of the supply chain, is an important issue to be raised in Berlin.
Said Hughes: “We need to restructure how the ground handling activity is done, because there is so much inefficiency.
“That is predominantly born out of the fact that over the last fifteen years many carriers have moved away from a core service and outsourced it to one of the major ground handlers.
“These organisations then had the challenge of taking twenty or thirty carrier requirements for standards and trying to build those into one internal process in the warehouse.”
He added: “That just breeds inefficiency and therefore breeds increased costs. So by working very closely with the ground handling community we will try to bring some enhanced and harmonised standards.”
The Berlin show will see a return of the Future Air Cargo Executive (FACE) progamme to develop the next wave of industry leaders, plus a call for 2017 entries to the biennial IATA Cargo innovation awards.
Dr Fang Liu, ICAO secretary general, is a confirmed speaker at WCS, while the head of the Red Cross has been invited to speak on humanitarian aid flights.
IATA is also introducing a summit at the WCS for chief information or technology officers across the industry, be it at an airline, airport, ground handler, trucking company or forwarder.
Said Hughes: “There is much investment going into the aviation sector, but most of that it is going into airport improvements, in passenger flow and lounges, in-flight entertainment systems and new aircraft.
“But we need to make sure that cargo infrastructure and cargo technology supporting operational efficiency get a fair shake of investment.”
On the broader issue of the industry’s profile, Hughes observed: “Over the last 20 years as an industry, air cargo has never really promoted itself outside of the family.”
He concluded: “E-commerce is predicated on air cargo and we haven’t really sung our praises to the global congregation. As IATA we need to ensure that the air cargo industry stays proud of what it is doing.”