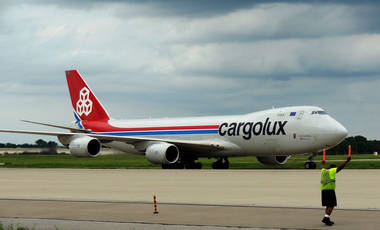 CARGOLUX’S twice-postponed inaugural B747-8 flight to Zhengzhou has taken off after the all-cargo airline finally obtained operating permits from the Chinese authorities.
Initial twice-weekly services will be increased to four from July, with an additional two frequencies added from September, says a company statement.
The implementation of scheduled services between Luxembourg and Zhengzhou is a major element of the commercial cooperation agreement between Cargolux and its Chinese investor HNCA, which owns a 35 per cent stake in the airline, it adds.
In addition to Zhengzhou, the European carrier also operates all-cargo flights to Beijing, Shanghai and Xiamen in mainland China.
Share this story