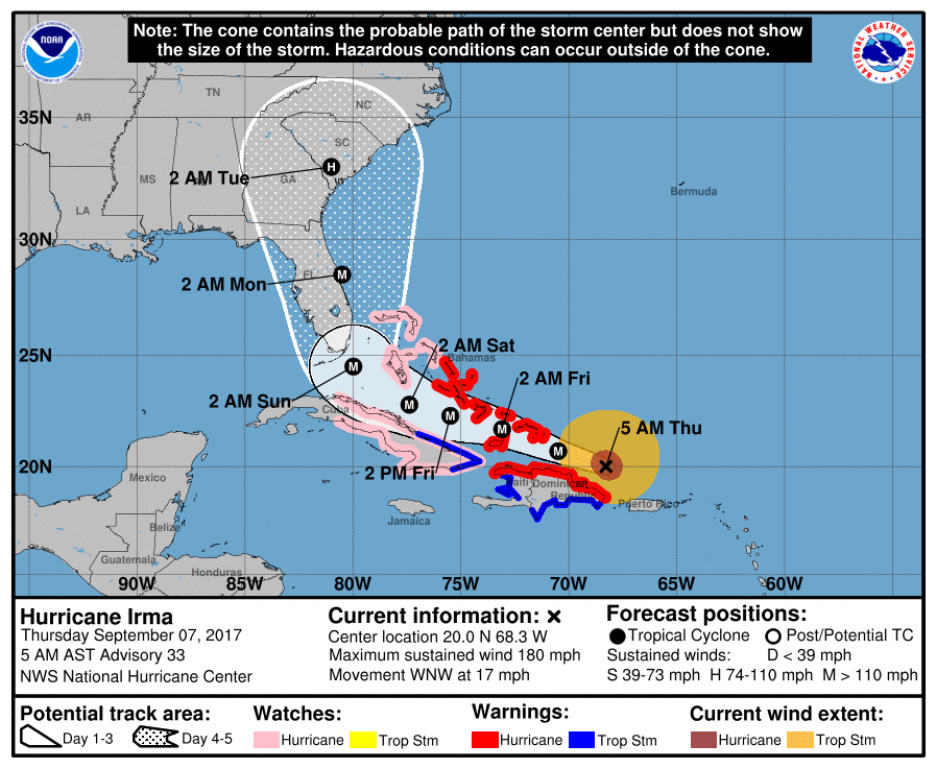 Air cargo operations in the Caribbean are facing major restrictions as the devastating Hurricane Irma wreaks havoc across the region, while preparations are being made for when the storm hits Florida.
The category five hurricane, which is the highest possible rating, has left at least nine people dead and is reported to be the most powerful storm in the Atlantic in more than a decade.
The island of Barbuda is reported by the BBC to be “barely habitable” while St Martin is “almost destroyed”.
The hurricane is currently (9.30am UK time) passing north of Puerto Rico and is heading towards Florida past Cuba. In response, US airlines have restricted cargo operations in the region.
United Airlines Cargo said it is closing its freight facilities and restricting all acceptance and movement of freight and mail via Miami International (MIA), Fort Lauderdale International (FLL), Palm Beach International (PBI) and Southwest Florida International (RSW).
“Restrictions apply to all origin, transfer or destination shipments of all freight, mail and PetSafe. No freight, mail or PetSafe shipments will be transported in, out or through MIA, FLL, PBI and RSW via flight or truck,” the airline said.
“These restrictions may be modified pending the path and intensity of Hurricane Irma. We will issue updates as the situation evolves.”
American Airlines Cargo, meanwhile, has placed an embargo on all cargo shipments, including priority parcel and mail until further notice, to/from/through Antigua, Nassau (Bahamas), Providenciales (Turks and Caicos), San Juan (Puerto Rico), Saint Kitts, St Thomas (US Virgin Islands) and Saint Maarten.
Cargo to/from/through FLL and PBI is halted from September 8 until September 10, RSW from September 9 until September 10 and for MIA outbound shipments are stopped at 10pm on September 7 until 5pm September 11, while inbound will be stopped 6pm September 8 until 5pm September 11.
“These restrictions may be adjusted as we continue to assess the path and intensity of Hurricane Irma. We will issue updates as the situation evolves,” the airline said.
Meanwhile, Delta Cargo has placed a cargo embargo on Nassau, Punta Cana, Santiago and Santo Domingo (all three Dominican Republic), San Juan, St Maarten and St Thomas.
It added that central and southern Florida were under evaluation.
Hurricane Irma has struck the Caribbean around a week after Hurricane Harvey caused devastation in the Houston area.
Cargo operations affected by Harvey are now back underway.
Why not sign up for Air Cargo News’ free email news bulletin