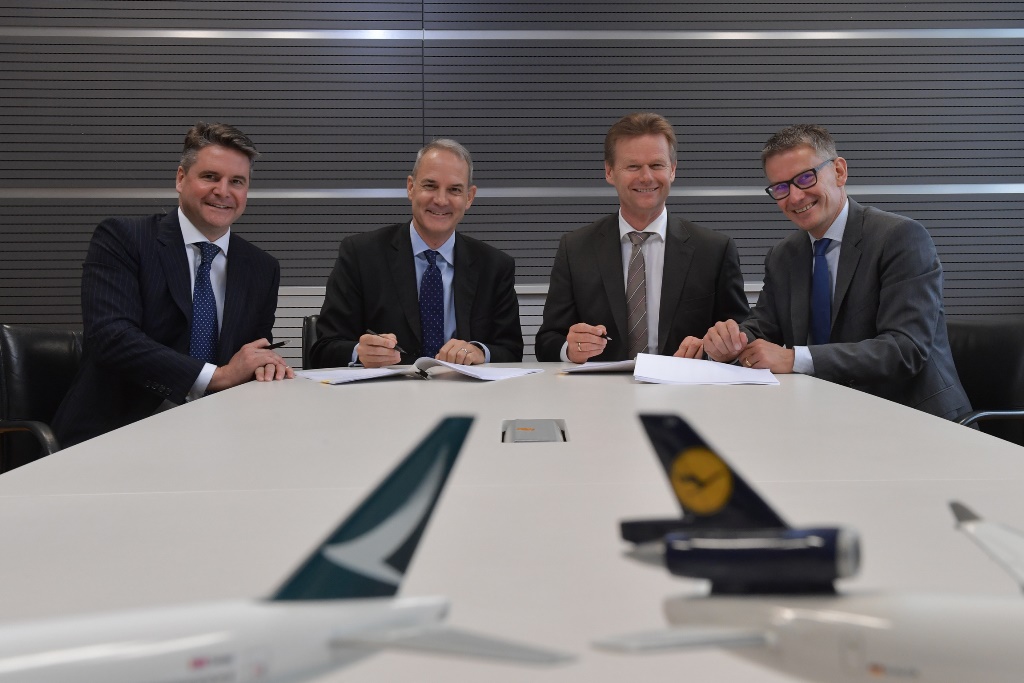 Cathay Pacific and Lufthansa Cargo have signed a partnership that will see the two airlines offer a joint network of more than 140 flights per week between Hong Kong and 13 European destinations.
The “highly integrated bilateral co-operation” is due to begin early next year and will see the two airlines work closely together on network planning, as well as sales, IT and ground handling.
Cathay Pacific director cargo Simon Large said: “Cathay Pacific’s large number of direct connections to multiple European destinations fits perfectly with Lufthansa’s strength in Frankfurt, the most important European airfreight hub, and in Europe through its dense feeder-network.”
Lufthansa Cargo chief executive and chairman Peter Gerber added: “By joining forces, customers gain access to unique flexibility with more flights to choose from and a combination of feeder and direct flights. In this way their cargo can reach its destination hours earlier.”
“We will also have more options for shipments which have to be transported by freighter due to their size or properties.”
The airlines said customers will be able to access the entire joint network via the booking systems of both partners.
Joint handling, initially at the Hong Kong and Frankfurt hubs, will also make things easier for customers since there is just one point for export drop off and import delivery.
Both partners plan to transport the first shipments under the framework of the cooperation from early next year – initially from Hong Kong to Europe. The ability to also book eastbound shipments from Europe to Hong Kong will then follow in the course of the year.
Lufthansa Cargo has been looking to expand its partnerships over the last few years, opting for a “metal neutral” setup that sees revenues generated distributed from a central pot and then distributing accordingly. This is done to stop sales teams from prioritising their own services.
All flights are also displayed on each partners’ booking platforms so there is no delay when bookings are placed.
Past airline alliances failed because response times on bookings were slow because processes weren’t as digitised as they should have been, cargo on one plane had to be delivered to various member premises, there was not enough harmonisation of standard products and they often faced implementation problems.
As well as its partnership with ANA on the Europe-Japan trade, it is also in process of negotiating a deal with United Airlines covering the transatlantic.
The news comes after a tough first quarter for Lufthansa’s cargo business as it recorded another operating loss as industry overcapacity and weak demand took their toll.