Challenge Airlines flies baby formula as part of US operation 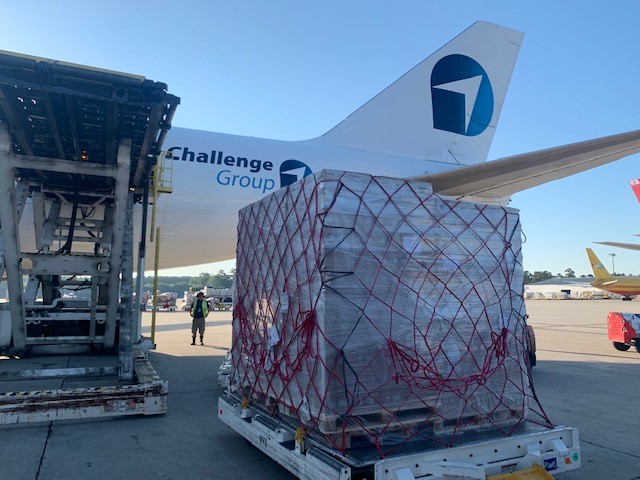 Challenge Airlines has operated a freighter flight transporting baby formula to the US as part of a Washington initiative to import the product to meet a shortage.

As part of the government’s ‘Operation Fly Formula’, a Challenge Airline’s B747 freighter landed at George Bush International Airport from Germany on June 26 carrying 68 tonnes of the product.

Over 10,000 boxes, built up on 98 pallets, were offloaded upon landing, and made their way to the Nestlé distribution centre in Fort Worth, Texas.

From there, they were sent out to large American supermarket chains including Target, Walmart and Kroger.

“The beauty of air cargo is the variety of missions we are able to be involved in, and this is a particularly rewarding one,” said Or Zak, vice president commercial of Challenge Group.

“It is the first time in Challenge Group’s history, that we have transported 98 pallets consisting purely of baby formula. And it is wonderful to know that, thanks to Challenge Airline’s role in Operation Fly Formula, today, one-and-a-half million babies will soon be able to enjoy another feed.”

Since May 2022, the US government’s Operation Fly Formula mission has seen various airlines operate a total of 32 flights, bringing in more than 90m bottles of eight-ounce baby formula from different parts of the globe, such as Australia or the UK, in an effort to bridge the major shortage currently being suffered in the US.

“To speed up the import of infant formula and get more formula to stores as soon as possible, President Biden has directed the Department of Health and Human Services and US Department of Agriculture to use Department of Defense (DoD) commercial aircraft to pick up overseas infant formula that meets US health and safety standards, so it can get to store shelves faster,” the White House said.

“DoD will use its contracts with commercial air cargo lines, as it did to move materials during the early months of the Covid pandemic, to transport products from manufacturing facilities abroad that have met Food and Drug Administration  safety standards.

“Bypassing regular airfreighting routes will speed up the importation and distribution of formula and serve as an immediate support as manufacturers continue to ramp up production.”

The White House added that the shortage is caused by by Abbott Nutrition’s voluntary product recall.

Delta Cargo is amongst the airlines contributing to Operation Supply Formula.