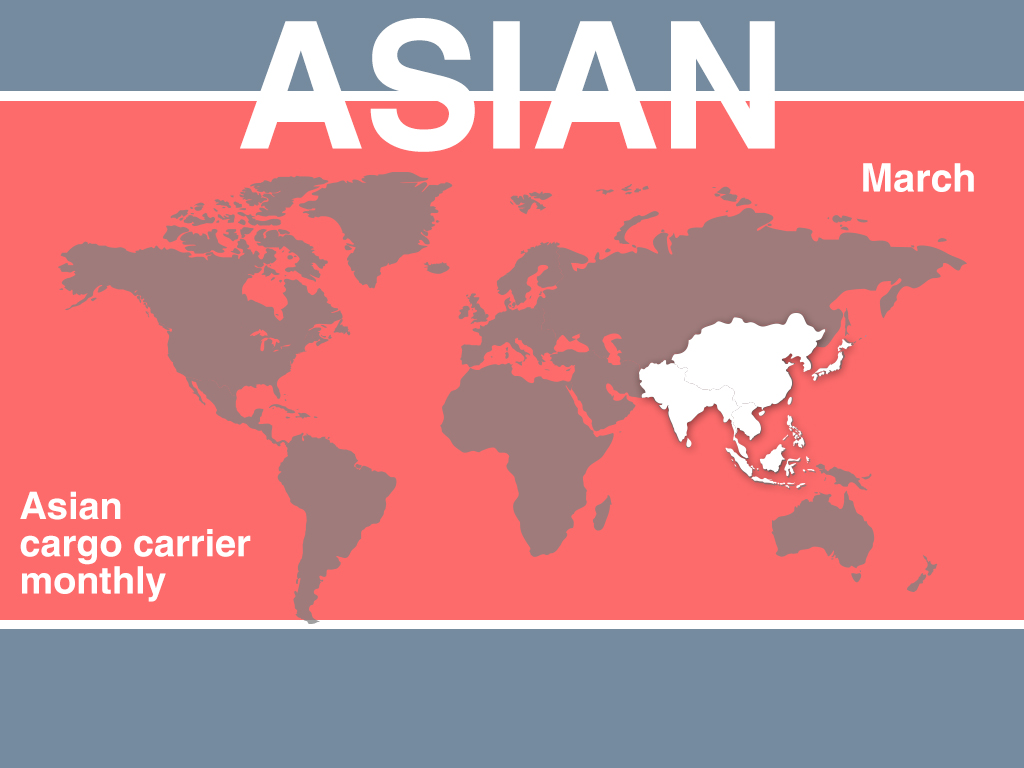 There was a slight improvement in the fortunes of some of Asia’s largest cargo carriers in March as three airlines saw demand increase against last year, but declines were registered at a further four companies.
The region’s largest cargo carrier Cathay Pacific saw demand decrease by 4.1% year on year in March to 891m cargo and mail revenue tonne kms.
Cathay Pacific general manager cargo sales & marketing Mark Sutch said market conditions were tough, but added there were some bright spots to be found. 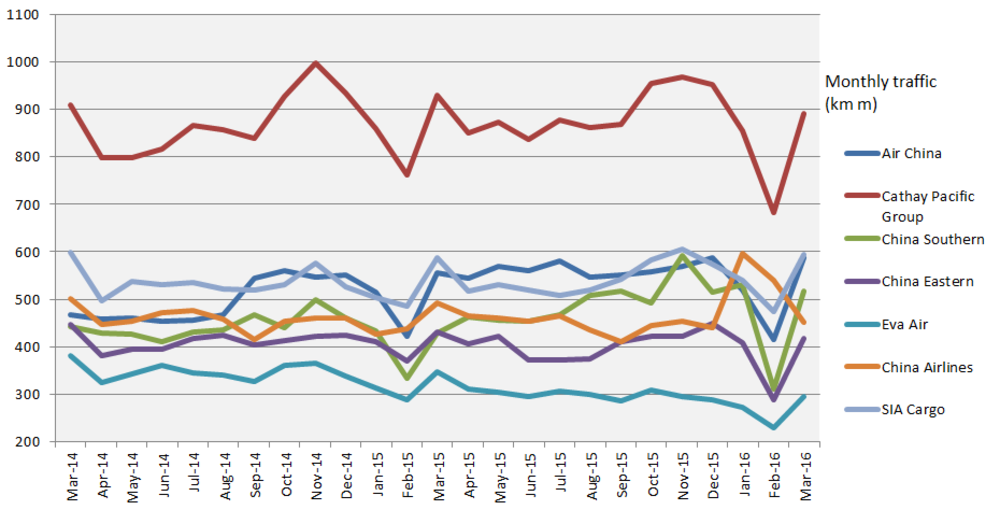 “Following a generally weak February, we saw some improvement in airfreight demand in March,” he said.
“This was helped by the shipment of new consumer IT products out of the major manufacturing cities of western China.
“There was a pickup in traffic on key transpacific routes, and we mounted a number of additional flights into India in response to continued robust demand.
“Overall, however, the air cargo markets remain soft and yield remains under pressure in what is a highly competitive environment.”
While demand slipped during the month, cargo capacity at the airline group climbed by 4.1% and as a result its load factor slipped from 68.4% during March last year to 63% this year.
The March figures also provide an opportunity to see how cargo demand has progressed with effects of a change in timing of the Chinese New Year stripped out.
During the first quarter, Cathay registered a demand decrease of 4.8% on a year ago, although the 2015 figures would have been boosted by the US west coast port strike that saw cargo switch from sea to airfreight.
The airline that possibly had the best March was China Southern as it saw demand jump by 21% on a year earlier to 518m revenue freight tonne km (RFTK).
This represents a bounce back from February when it registered a decline, although results for that month would have been affected by the timing of the Chinese New Year and the US west coast boost of 2015.
Other than February, the airline has been registering double-digit demand increase since August last year.
The airline also managed to increase its cargo load factor for March from 48% to 50.3% as capacity increased by the lower amount of 15.6% on a year earlier.
Looking at the first quarter, demand is up 13.6% compared with a year ago.
Air China and Singapore Cargo were the other airlines that managed to register a demand increase in March.
Air China saw March cargo demand increase by 5.6% on a year earlier to 587m RFTK after registering a decrease in February. For the first quarter demand was up 1.9% compared with a year earlier.
The increase in demand was not enough to stop load factors decline at the airline as a 8.6% increase in capacity saw a slip in utilisation from 55.1% in March last year to 53.6% this year.
Singapore Airlines was the other carrier to register an increase in cargo traffic. SIA Cargo saw demand increase by 1.2% on a year earlier to 594m freight tonne km (FTK).
SIA has been reporting single-digit demand growth for a while now, although it also registered a decline in February.
SIA’s cargo load factor slipped from 67.8% in March last year to 64% this year as it increased capacity by 7.3%. For the first quarter, demand was 2% up on a year earlier.
The airline which registered the largest cargo demand decline in March was Eva Air which registered a 15.2% slide to 295m FTK.
The decline isn’t out of the ordinary as it has been registering double-digit demand declines stretching back to April of last year. For the first quarter, traffic was 16.2% behind a year ago.
March capacity was also down on a year earlier – a 3.9% decline – but this wasn’t enough to stop load factors declining to 80.1% compared with 90.9% last year.
China Airlines also had a tough time in March as demand slipped by 8.3% on a year earlier to 452m FRTK. It is the tenth month in a row the airline has seen cargo volumes slide.
For the first quarter, there was a 13% decline in volumes on the same period in 2015. With cargo capacity increasing in March, the airline saw its cargo load factor drop to 67.5% against 75.4% last year.
Finally, China Eastern registered a 3.3% year on year decline in demand in March to 418m RFTK. It is the third month in a row the airline group has seen demand slide.
For the first quarter, demand was 8% behind the level registered in 2015. 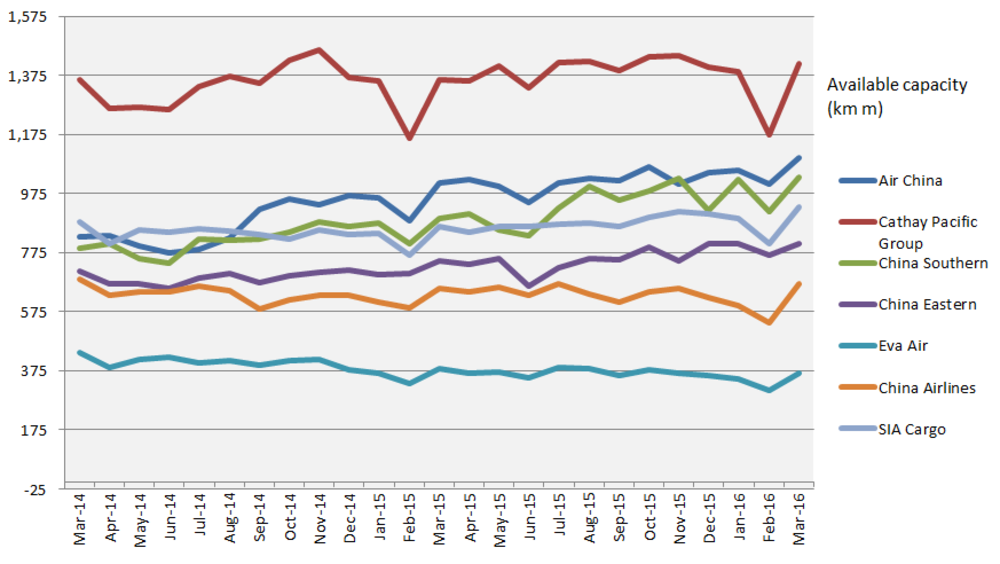 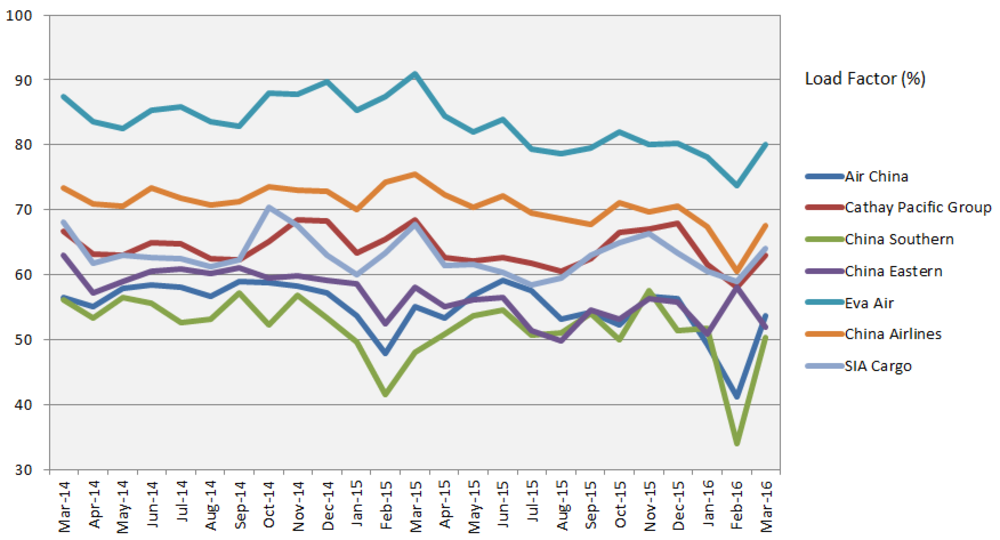