ANALYSIS: The latest monthly airline data has revealed that while European airlines have been struggling to protect cargo load factors because of volume declines, Chinese airlines have faced the same issue but because of capacity additions.
During July, of four major Chinese cargo carriers, three recorded demand increases on last year, while only China Eastern recorded a decline.
Overall, the four airlines recorded an 11.3% year-on-year increase in demand during the month.
However, this wasn’t enough to protect load factors as all the airlines recorded capacity increases ahead of demand growth. 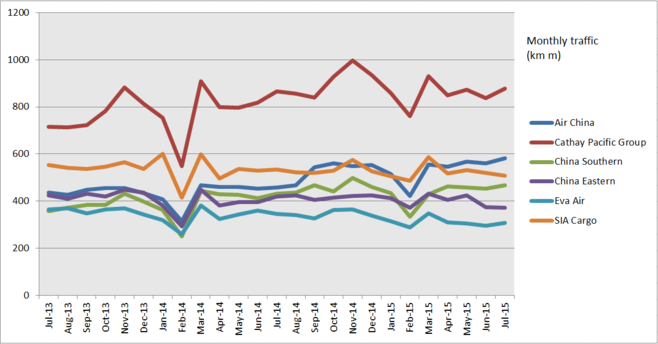 Source: Companies. Notes: Eva/SIA = FTK; China/Southern/Eastern = RFTK; Cathay = CMRTK
The largest increases registered were those of Air China, which saw July traffic increase by 27.1% on last year to 581m revenue freight tonne km (RFTK).
The increase isn’t just down to extra traffic, as in tonnage terms it recorded a July increase of 14.5% suggesting that cargo is being flown longer distances with the addition of services further afield.
The jump in tonnage is also still higher than Asian market growth.
But even this double-digit increase in demand wasn’t enough to outstrip the 28.2% year-on-year jump in supply to 924m available freight tonne km (AFTK). 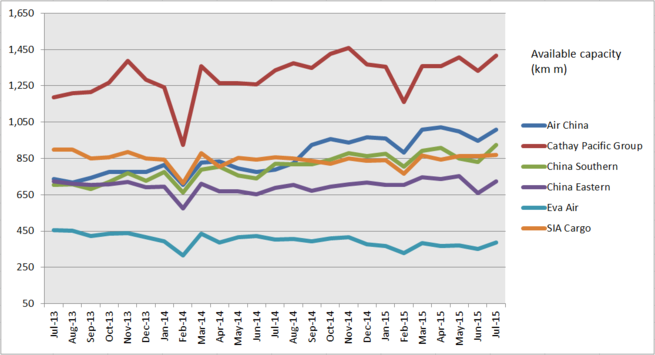 Source: Companies. Notes: Eva/SIA/China/Southern/Eastern = AFTK; Cathay = ACMTK
The fast-growing airline has expanded its fleet rapidly over recent months. In September last year it began recording double-digit percentage increase in available cargo capacity and since then its fleet has increased from 518 to 566 aircraft.
As a result of supply outstripping demand in July, its load factor slipped by 0.6 percentage points to 57.5%.
The largest decline in load factor during the month was experienced by China Eastern, which recorded a 9.4 year on year percentage point decline in July as demand decreased by 11.1% to 372m RFTK and  capacity increased by 5.1% to 724m AFTK. 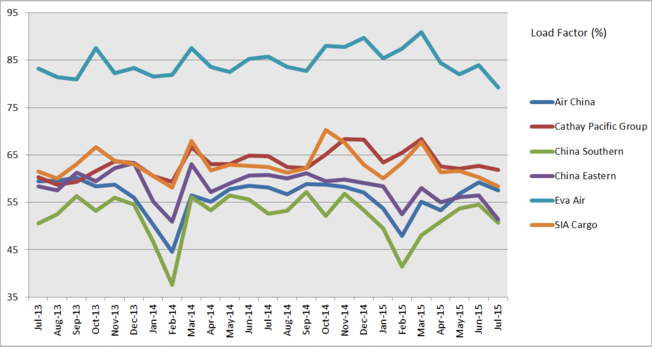 Source: Companies
While demand at the airline was down in July, for the first seven months China Eastern managed to record an increase.
Meanwhile, the world’s largest cargo airline, Cathay Pacific, recorded a 1.4% year-on-year increase in airfreight volumes in July to 877,066 cargo and mail revenue tonne km (CMRTK).
Capacity increased by 6.2% during the month to 1.4m available cargo/mail tonne km (ACMTK), resulting in its load factor slipping to 61.8% from 64.7% in July last year.
The airline said that demand for the month had been below expectation.
Finally, China Southern recorded an 8% year-on-year increase in demand but its load factor declined as a result of a 12.5% increase in capacity.
While air cargo growth in general has softened across the world as the year has progressed, according to IATA, the slowdown has been more severe in Europe than Asia.
During the first six months, European airlines have recorded a year-on-year demand declines in four of the first six months, while Asia Pacific airlines have seen one month of decline.
So while the major cargo airlines from both regions have seen load factors slide, in Asia the slip has largely been down to capacity additions outstripping growth, while in Europe a fall in demand is to blame.
For other major Asian airlines that report monthly statistics, their load factor declines seem to be more closely affected by demand slips than capacity additions, like European rivals.
Eva Air saw cargo demand decline by 11% year on year in July to 307m freight tonne km (FTK), while its capacity was reduced by the lower amount of 3.7% resulting in a 4.3 percentage point slip in load factor.
SIA Cargo recorded a 5% volume decline to 508m FTK on a year earlier and a 1.5% capacity increase. As a result its load factor was down to 58.4% from 62.5% a year earlier.