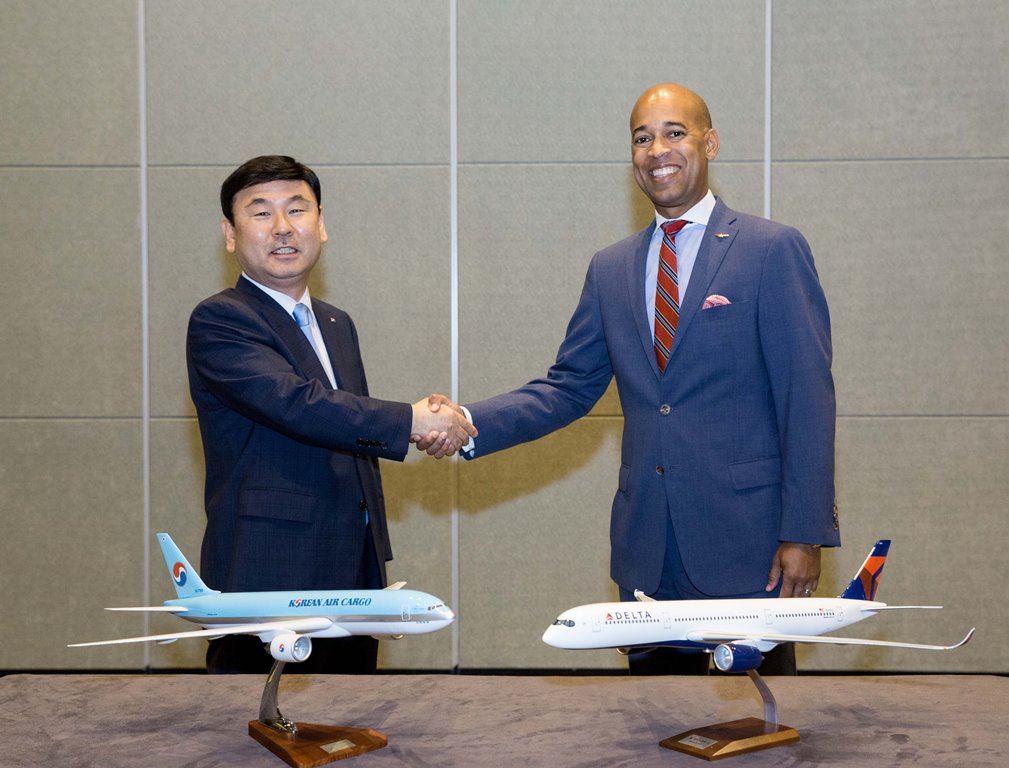 Delta Air Lines Cargo and Korean Air Cargo are launching new transpacific cargo co-operation in connection with the implementation of their joint venture partnership.
The partnership means the two carriers will be able to share space on each others aircraft flying between the US and Asia.
The combined network formed by the partnership gives Delta and Korean Air’s shared customers access to more than 290 destinations in the Americas and more than 80 in Asia.
The cargo co-operation comes a little over a year after the airlines announced a partnership on the passenger side of their businesses.
Delta vice president cargo Shawn Cole said: “The Delta and Korean Air JV means increased joint belly cargo capacity across the trans-Pacific as well as future co-location of key facilities, world-class reliability and the industry’s best customer service.
“The partnership also means a host of new destinations with commercial and logistics solutions across Asia and North America for these important markets.”
The two partners said they currently transport a diverse range of cargo products in the transpacific market: from the US, semi-conductor production facilities, perishables and e-commerce shipments are some of the key products shipped to Seoul and throughout Asia. In the reverse direction mobile phones, automobile parts and other electronics are carried.
Samsug Noh, senior vice president, head of cargo business division, Korean Air, said: “We are excited to partner with Delta to create an unrivalled air cargo network across North America and Asia.
"This is bolstered by Korean Air’s leading trans-Pacific air freight network, as well as Delta’s nationwide schedule and sales network within the US.
“I am confident that the partnership will further strengthen our capability to offer an unequalled expertise on all aspects of air cargo transportation.”
The joint venture routes, on which Delta and Korean Air carried 268 m tons of belly cargo in 2017.
Earlier this year, Delta and Korean Air co-located into the new, state-of-the-art Terminal 2 at Seoul’s Incheon International Airport. This means substantially reduced connecting times for both passengers and cargo, and one-roof warehousing is planned for the airport as well.
Delta has been ramping up its partnerships over recent years. the European market is covered through its AF KLM and Virgin Atlantic deals, which were ramped up in 2016, its South American network was enlarged through its partnership with AeroMexico, while the deal with Korean will help expand its presence in Asia, with its already "strong platform" to Japan.