Demand picks up pace for Asian airlines in September Asian airlines saw air cargo volumes begin to pick up in September ahead of the peak season, but continued to report declining airfreight load factors.
The latest monthly figures from the region’s leading airlines show that five of the seven carriers that provide monthly figures saw utilisation levels decrease compared with the same month a year ago.
On the demand front, all but two of the airlines saw cargo volumes increase compared with August levels and also compared with a year ago. 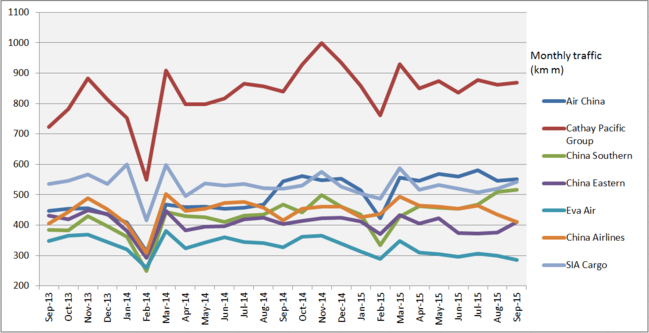 Data source: companies. Graphic source: Air Cargo News
The only two airlines that managed to avoid recording load factor decreases were Cathay Pacific and Singapore (SIA).
Cathay’s September load factor was up to 62.4% compared with 62.2% a year earlier on the back of a 3.5% year-on-year increase in demand to 868m cargo and mail tonne km, while capacity was up by 3% on a year earlier. It was the airline’s second busiest month of the year so far.
Cathay Pacific general manager cargo sales & marketing Mark Sutch said: “As expected, demand in the cargo markets began to climb as we moved into September, though it was more of a trickle than a surge.
“Our business received a boost from the movement of new consumer IT products out of the key manufacturing areas of western China, but overall the momentum in the markets remained flat.
“Our main focus was on transpacific routes to the Americas though demand to and from India continued to remain buoyant.
“We still expect to see a traditional winter peak and will be operating a full-freighter schedule from mid-October through November.” 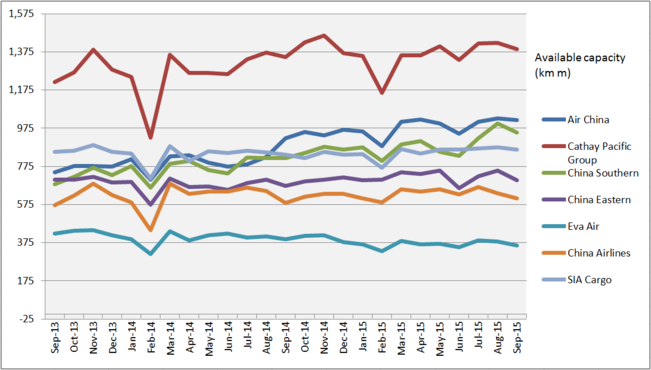 Data source: companies. Graphic source: Air Cargo News
The only other airline that managed to improve its load factor on a year ago was SIA, which saw utilisation reach 62.9% compared with 62.2% a year earlier.
This increase came as a result of a demand increase of 4.4% on a year earlier, compared with fairly flat growth for the rest of the year. September was also SIA’s second busiest month of the year.
The airline to see largest year-on-year demand increase was fast growing China Southern, which recoded a 10.3% increase to 516m freight tonne km.
However, this was not enough to offset a 16.4% increase in capacity during the month and as a result its load factor tumbled to 54.1% compared with 57.1% last September.
September was a good month for China Eastern as it reversed three months in a row of monthly demand declines and reported a 1.7% year-on-year increase in traffic to 411m revenue freight tonne km.
This improvement, however, was not enough to offset a 4.8% increase in capacity and as a result its load factor slipped to 58.4%.
The carrier which arguably had the toughest September was Eva Air, which saw September cargo traffic decrease by 12.5% on a year earlier.
This is in line with performance for the rest of this year as it has recorded declines in eight of the nine months reported so far.
It is also in line with a reduction in capacity, with cargo space down 8.6% in September. However, the airline has big plans for its cargo division and finalised an order for five Boeing 777s freighters in July.
It was also a difficult month for Taiwan’s China Airlines, which saw volumes decline by 1.2% year on year and capacity increase by 3.8%.
This resulted in its load factor sliding to 67.7% against 71.2% a year earlier. It is the fourth month in a row the airline has recorded a decrease in cargo volumes.
Finally, an increase in traffic at Air China of 1.3% compared with a year earlier was not enough to stop a decline in its cargo load factor as its capacity was up 10.2% year on year. 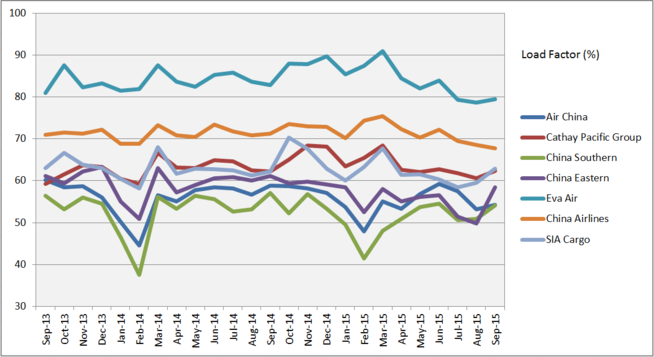