The November peak season was another tough month for Asian air cargo carriers as weak demand and capacity additions put pressure on air freight rates.
The latest monthly statistics from Asian airlines show all but one of the carriers that report statistics saw load factors decline during November.
The largest of the carriers, Cathay Pacific saw volumes slide by 3.1% to 967m cargo and mail revenue tonne km compared with a year earlier.
Some of the effects of the decline were mitigated by a 1.2% reduction in capacity, but this was not enough to stop its cargo load factor slip to 67% from 68.4% a year earlier.
Cathay Pacific general manager cargo sales & marketing Mark Sutch said yields  were also put under pressure due to oversupply. 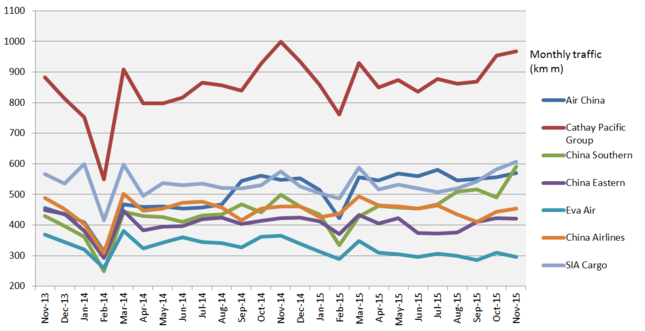 Data source: Companies. Graphic source: Air Cargo News
“We entered the traditional peak period for airfreight in November, but overall demand fell short of our original expectations," he said.
“We saw a decline in the tonnage carried compared to the same month last year, while yield fell short of expected peak-season levels due to an excess of capacity in the market.
“On the positive side, we saw good demand on transpacific routes, which remains our key area of strength, and also into and out of India.
“And our cargo terminal in Hong Kong recorded its highest monthly throughput since commencing operations.”
The yield pressure mentioned by Sutch is reflected in airfreight rate data issued yesterday by consultant Drewry, which saw a decline in its price index for the first time in four months.
The largest demand decline recorded during the month was experienced by Taiwan’s Eva Air, which recorded a 19.2% slump to 295m freight tonne km.
The airline did reduce capacity during the month – by 11.3% – but it wasn’t enough to stop its cargo load factor declining to 80.1% from 87.8% last year.
Year-on-year demand declines were also recorded at China Airlines (-1.5%) and China Eastern (-0.3%). Both carriers added capacity during the month which meant that load factors were down on a year ago for both airlines.
However, declines were not registered at all airlines as fast-growing China Southern and Air China, as well as SIA Cargo, all recorded year-on-year increases in November.
China Southern saw demand jump by 18.4% on a year earlier to 591m revenue freight tonne km.
When recently questioned by Air Cargo News about how it was managing to achieve the growth rates, China Southern said it had utilised its growing bellyhold capacity to target international mail and fresh goods, which benefitted from the growth of cross-border e-commerce, and through the addition of four Boeing 777 freighters.
Capacity in November was up by 16.9% meaning the airline registered an improved load factor of 57.6%.
Air China, which up until recently had been growing at double-digit levels, registered a 4.2% increase in demand to 570m revenue freight tonne km. But capacity was up by 7.4% meaning its load factor slipped to 56.6%.
Lastly, SIA recorded a 5.4% increase in demand to 606m freight tonne km. Capacity was up by the higher amount of 7.3% meaning its load factor slid to 66.1%. 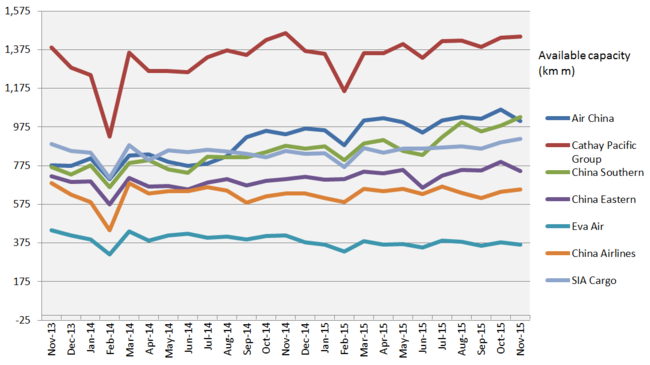 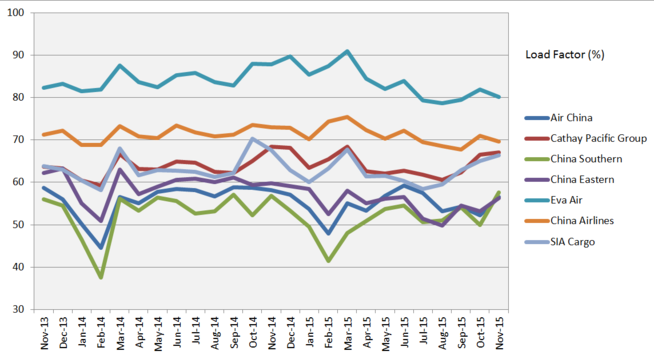