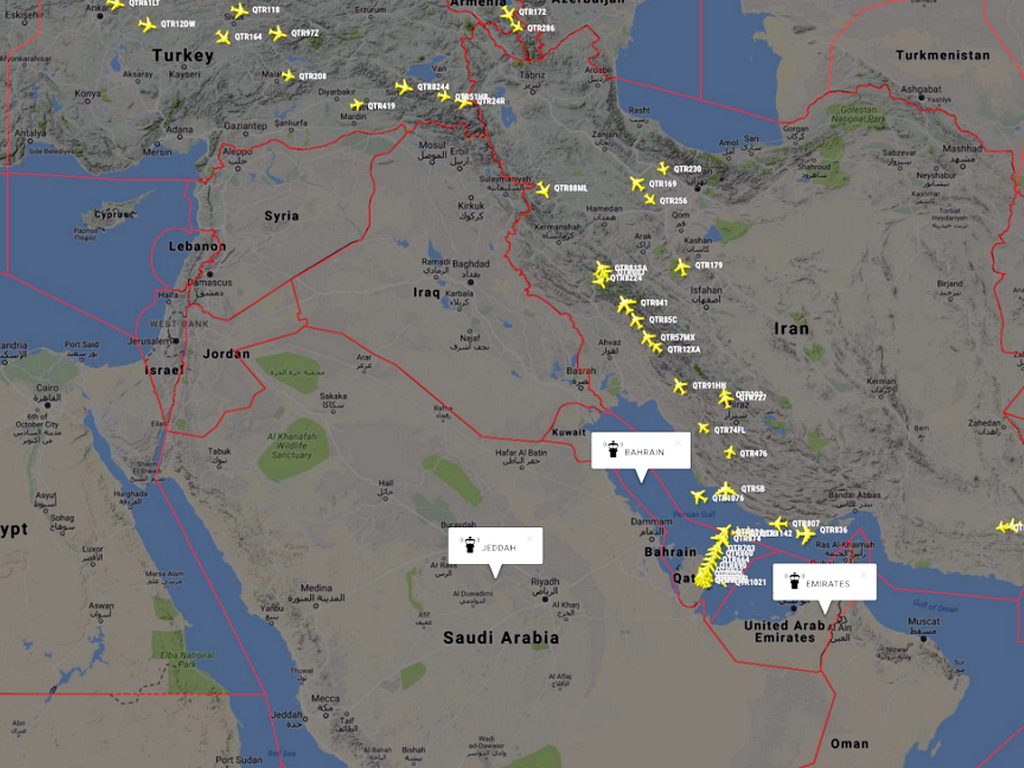 Etihad Airways and Emirates have suspended flights into Qatar as a diplomatic row has broken out over accusations that the country is destabilising the Middle East region.
Along with Etihad and Emirates, FlyDubai and Air Arabia have also cut flights to Doha while Saudi Arabia, the United Arab Emirates, Bahrain and Egypt said they would close their airspace to Qatar Airways, reports suggest.
Saudi Arabia has said it will also close its land border with Qatar, which is the only way of reaching the nation by land.
Although the moves will not cut off the country from the outside world, Qatar Airways could be forced to alter some routes to Doha and therefore bump up the price of using its services because of the elongated journey.
In a short notice on its website, Qatar Cargo said: "Qatar Airways has suspended all flights to the Kingdom of Saudi Arabia until further notice. For existing bookings, please call +974 4423 5077 or contact your nearest Qatar Airways Cargo office."
Etihad Cargo said: "All customers who have cargo booked on Etihad flights to and from Doha are being provided with alternative options and will be contacted directly regarding their specific requirements.
"Should you have any concerns about specific shipments, please contact your local Etihad Cargo office or alternatively our dedicated customer service team can be contacted 24 hours a day, 7 days a week.
"All other Etihad Cargo flights, including to the rest of the Middle East, are operating as normal.
"Any further changes to the status of flight schedules to Doha will be communicated through the appropriate channels. Etihad Cargo regrets any inconvenience caused as a result of the suspension."
Meanwhile, the lack of a land crossing, which the BBC said is how 40% of Qatar’s food reaches the country, could create a demand surge for air and sea operations, forcing up prices of using these services.
The country is also in the midst of several construction projects as it is building eight new stadium for the 2022 football World Cup, a new port, a medical zone and a metro project.
The diplomatic row centres on accusations that Qatar has been supporting militant groups like Islamic State and al-Qaeda, something Qatar denies.
Over the weekend, Qatar Airways launched a new A330 freighter route connecting London Heathrow with Doha.
Qatar Airways Cargo currently operates freighters to London’s Stansted Airport and also transports cargo on passenger flights to and from Birmingham, Edinburgh, London Heathrow and Manchester.
With the new freighter service, the carrier’s total cargo capacity out of the United Kingdom increases to more than 1,500 tonnes each week.
Qatar Airways Cargo also recently commenced five new freighter destinations to the Americas and Asia: Buenos Aires, Sao Paulo, Quito, Miami and Phnom Penh, while also increasing frequencies to Brussels, Basel and Hong Kong in response to growing airfreight demand in these regions.
The cargo carrier has seen a 21% increase in tonnage from 2015 to 2016, despite the air cargo industry remaining competitive due to an underperforming economy.
Ulrich Ogiermann, Qatar Airways chief officer cargo, said: “The commencement of the freighter services to London Heathrow marks our sixth new freighter destination for 2017 and boosts our current belly-hold capacity available on 72 passenger flights to the United Kingdom every week.
“We are expanding our network globally, offering customers direct access to major trade markets such as the United Kingdom via our state-of-the-art fully-automated hub in Doha.”