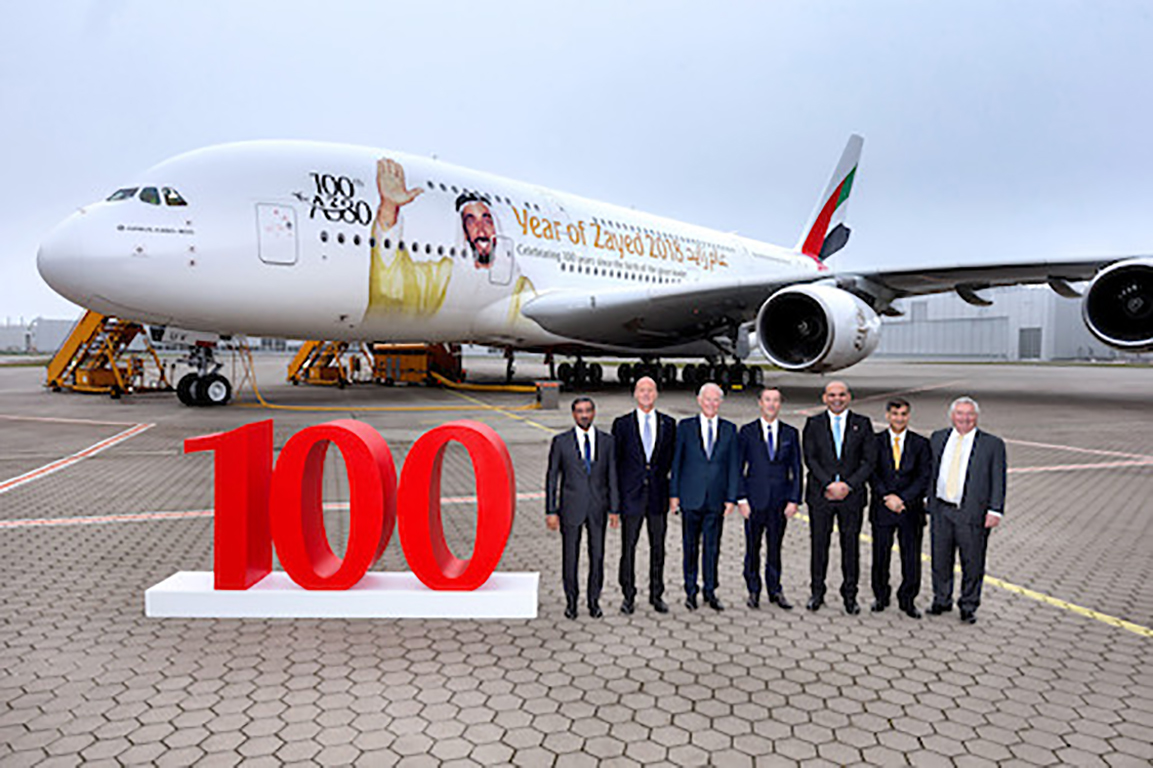 Emirates has celebrated the delivery of its 100th Airbus A380 aircraft in a ceremony  at the European manufacturer’s delivery centre in Hamburg.
Ahmed bin Saeed Al-Maktoum, Emirates’ chairman and chief executive, was joined at the event by Tim Clark, president of Emirates Airline, and Tom Enders, Airbus chief executive officer.
While the A380 has not sold in the numbers that some had hoped: “For Emirates, the A380 has been a success,” Ahmed declared.
“We’ve been able to utilise it at slot-constrained airports, as well as at regional and ‘secondary’ airports. We remain committed to the programme and will work closely with Airbus and our partners to continually enhance our A380 product as we look ahead to receiving our remaining 42 aircraft on order.”
Emirates is the world’s largest operator of the A380 aircraft, flying the super-jumbo to 48 cities across six continents on scheduled services.
The airline takes delivery of an average of 11 A380s a year, having received its first of the aircraft type in August 2008. During its 2016-17 financial year, Emirates took delivery of 19 new A380 aircraft.
In another milestone, Emirates has celebrated 10 years of flying into Canada .
The UAE represents Canada’s largest export market in the Middle East and North Africa region, a statement from Emirates said. In 2016 alone, bilateral trade between Canada and the UAE was worth more than $1.9bn, a figure that had grown by 64% since the two countries were first connected by direct air services by Emirates in 2007.
In 2016, Emirates’ flights to and from Canada carried over 4,000 tonnes of cargo. Currently, major cargo imports include fruit, vegetables and fish. Major exports include pharmaceuticals, electronics, mining/drilling equipment, livestock and courier services.