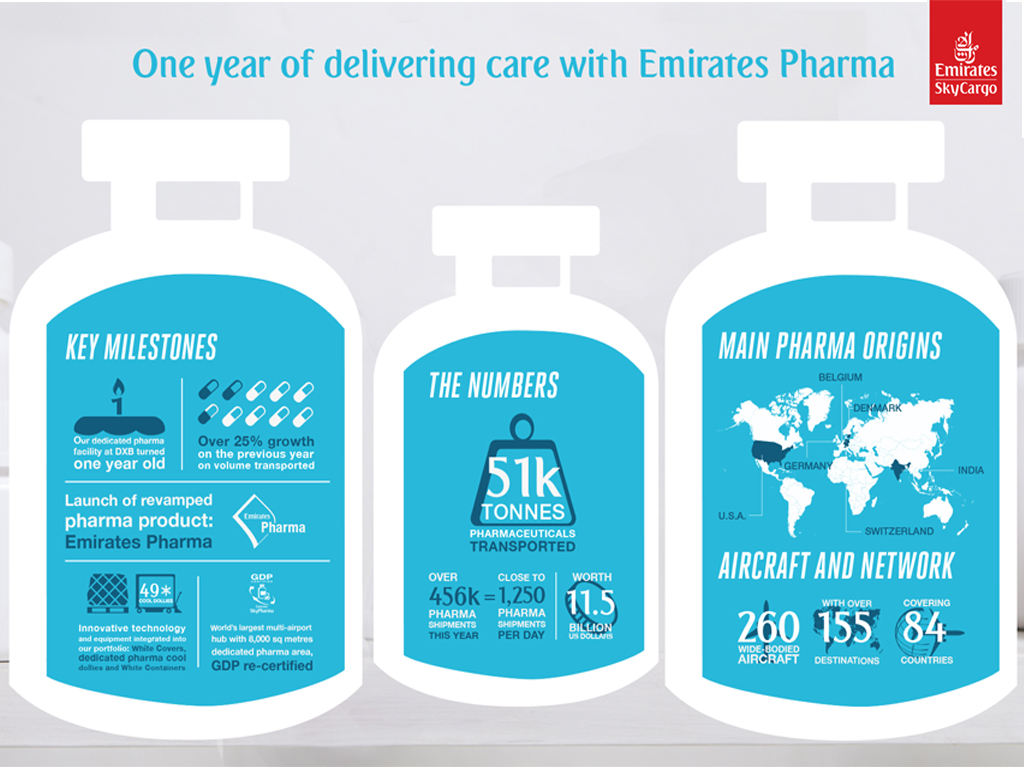 Emirates SkyCargo has gained revalidation of its European Union Good Distribution Practices (EU GDP) certification for pharma operations at its Dubai hub after an annual surveillance audit by Bureau Veritas, Germany.
The carrier originally received EU GDP certification in 2016 for its operations across the Emirates SkyCentral cargo terminals at Dubai International Airport and Dubai World Central as well as the 24/7 bonded trucking service connecting the two hubs. Emirates SkyCargo says this made it the operator of the world’s largest multi-airport GDP certified hub with over 8,600sq mres of dedicated pharma facilities including the purpose built pharma terminal at Dubai International inaugurated in September 2016.
September 2017 is also the first anniversary of the launch of the specialised Emirates Pharma product, which has now transported over 51,000 tonnes of pharmaceuticals valued at over US$11 billion.
Pharma volumes transported between January and September 2017 grew by over 25% when compared with the same period in 2016. Some of the main types of pharmaceuticals transported include vaccines, medication for diabetes and cancer, and Active Pharmaceutical Ingredients (APIs).
Emirates Pharma offers customers three levels – Emirates Pharma, Emirates Pharma Plus and Emirates Pharma Activedepending on the temperature sensitivity of the product, the packing used and the origin and destination of the shipment.
Emirates SkyCargo operates a fleet of nearly 50 cool dollies dedicated for pharma shipments as well as innovative thermal blankets developed in collaboration with DuPont. It also has agreements with major global container rental service providers such as CSafe, DoKaSch, Envirotainer, SkyCell and va-Q-tec.