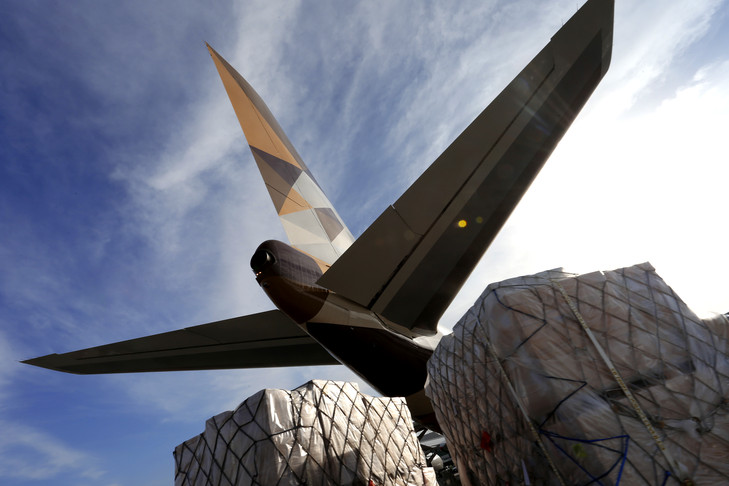 Etihad Airways saw its cargo revenues drop by 10% last year despite an increase volumes, while the overall company slipped to a $1.8bn loss.
The Abu Dhabi-hubbed airline recorded cargo revenues of $900m in 2016 compared with a $1bn in 2015. This came despite a 0.8% increase in cargo volumes to 595,916 tonnes.
A results statement spoke of a “slowdown in the cargo market” which put “increased pressure on cargo revenues and yields”.
It was also a tough year for the overall airline as one-off impairment charges and fuel hedging losses pushed the airline to a loss of $1.87bn compared with a $103m profit during 2015.
Total impairments of $1.9bn included a $1.1bn charge on aircraft, reflecting lower market values and the early phase out of certain aircraft types.
There was also an $808m charge on certain assets and financial exposures to equity partners, mainly related to Alitalia and airberlin.
Legacy fuel hedging contracts also had a negative bearing on performance in 2016, though this exposure is expected to have less of a financial impact during 2017.
The company has implemented a “right size and shape” programme, including headcount reductions, to try and correct the situation. The programme is estimated to have generated total overhead savings of 4%.
Ray Gammell, interim group chief executive, explained: “We are focused on maintaining the solid performance of our core airline business – operationally and financially – even amid difficult market headwinds. At the same time, we continue to implement changes across the group as part of the comprehensive strategic review, with a focus on improving revenues and reducing costs.
“This year is just as challenging for the global aviation industry and the ever-evolving competitive environment is likely to impact overall performance in 2017. However, our airline business remains strong and class-leading, and as an aviation group, we are in a stronger position.”
Gammell temporarily took over the top role on July 1 when James Hogan left the company.
Mohamed Mubarak Fadhel Al Mazrouei, chairman of the board of the Etihad Aviation Group, added: “A culmination of factors contributed to the disappointing results for 2016. The Board and executive team have been working since last year to address the issues and challenges through a comprehensive strategic review aimed at driving improved performance across the group, which includes a full review of our airline equity partnership strategy.”
The past year has also proved tough for Etihad’s UAE neighbour Emirates. The Group reported an AED 2.5bn ($670m) profit for the financial year ending 31 March, 70% lower the previous year’s record profit.
The cargo division reported a revenue of AED10.6bn ($2.9bn) down 5% over the previous year, although tonnage carried slightly increased by 3% to reach 2.6m tonnes.
Qatar Airways, meanwhile, saw cargo demand increase by 20.9% year on year to 1.15m tonnes. Cargo revenues for the period increased by 13.5% year on year to reach QR6.4bn.
According to IATA’s annual report, Emirates was the busiest of three airlines, followed by Qatar and Etihad behind its two rivals.
Read more cargo airline news