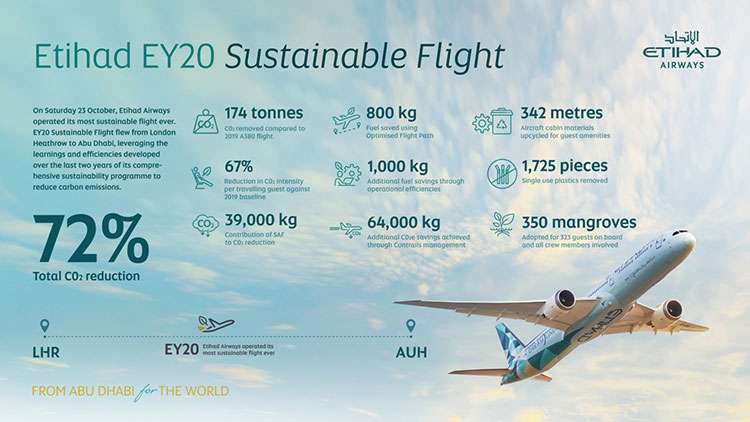 Etihad Airways has operated its most sustainable flight ever, reducing carbon emissions (CO2) by 72% in absolute terms compared to the equivalent flight operated in 2019.

Etihad Airways leveraged knowledge and efficiencies developed over the last two years as part of a two-year partnership with Boeing.

The Abu Dhabi-based airline and the US planemaker used Etihad’s Boeing 787 fleet as a test bed for sustainability improvements in partnership with organisations across the industry.

“When Etihad committed to achieve net zero, it was acknowledged that it was only possible if the airline worked collaboratively and positively with our industry partners. That is exactly what Etihad has done with the Sustainable Flight.

“Of equal importance, Etihad, Boeing and its partners – airports, ANSP, and suppliers – used the flight to learn where further improvements could be made.”

In an industry-first, EY20 was the first commercial flight to explore contrail-avoidance. Working with UK-based SATAVIA, the team identified potential areas of ice super-saturated regions in the atmosphere where harmful contrails are likely to form, and the flight route was adjusted to avoid these areas.

Based on the original and adjusted flight plan, the strategy avoided the production of approximately 64 tonnes of CO2e, with a fuel penalty of only 100kg, or 0.48 tonnes CO2.

Once the aircraft arrived at Abu Dhabi, it was serviced by Etihad’s new fleet of electric vehicles for ground logistics such as baggage unloading.

Where electric vehicles were unable to be used, Etihad purchased biodiesel for the necessary equipment.

The data gathered from the aircraft’s sensors was added to Etihad’s growing database on flight performance, and analysed using tools from Greenliner partner, GE Digital, to improve understanding of flight performance and allow quick recognition of unsustainable activities.

Al Bulooki added: “A fundamental part of the Greenliner programme is to explore the art of the possible. It is well known that SAFs are a credible alternative to current fossil fuels, however they are currently very expensive, and difficult to source and load onto the aircraft.”

He continued: “EY20 was a dramatic example of those constraints wherein Etihad was unable to directly load the 38% SAF blend into the aircraft given inherent infrastructure constraints at Heathrow Airport.

“Instead, the SAF purchased by Etihad was loaded into the fuel hydrant system, which serves all airport users. While the EY20 did not in itself realise the full potential of the SAF, the potential benefit in CO2 reductions is real.

“Industry and governments must work together to address these issues through the funding of the research and development of SAFs and other parts of the planning and operating of flights. Etihad is looking forward to working on these issues.”