Etihad will bring Alitalia back to profitability by 2017 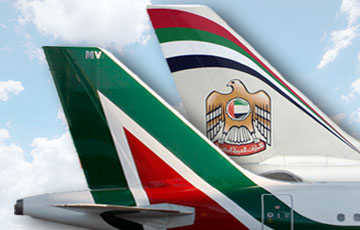 JAMES HOGAN, president and chief executive of Etihad Airways, has announced that the carrier has spent €560m to acquire its 49 per cent equity stake in Alitalia, writes Thelma Etim, deputy editor.
Under the deal, which will result in €1,758m of investment and includes restructuring the Italian carrier’s debt, the Middle East airline intends to take advantage of the positioning of Malpensa airport by moving its own cargo operations through there, he reveals.
“Cargo is an important part of the mix, we are a major cargo operator in our own right – it’s a billion dollar business within Etihad Airways.
“To be able to build the Alitalia cargo business is a key part of our strategy.”
“This is a unique opportunity for Alitalia to restructure and win,” Hogan continues.
The strategic partnership also includes a three-year plan to move the airline back to profitability by 2017.
Etihad will become a minority shareholder – subject to regulatory approval – with core Alitalia shareholders committing an additional €300m, says a company statement.
“This is an excellent outcome for Alitalia. We have had to take some tough decisions in a very robust negotiation process but we have achieved the consensus we require to create the right shape and size for Alitalia in the future," says Gabriele Del Torchio, chief executive of Alitalia.
The number of redundancies has sparked controversy.
Share this story