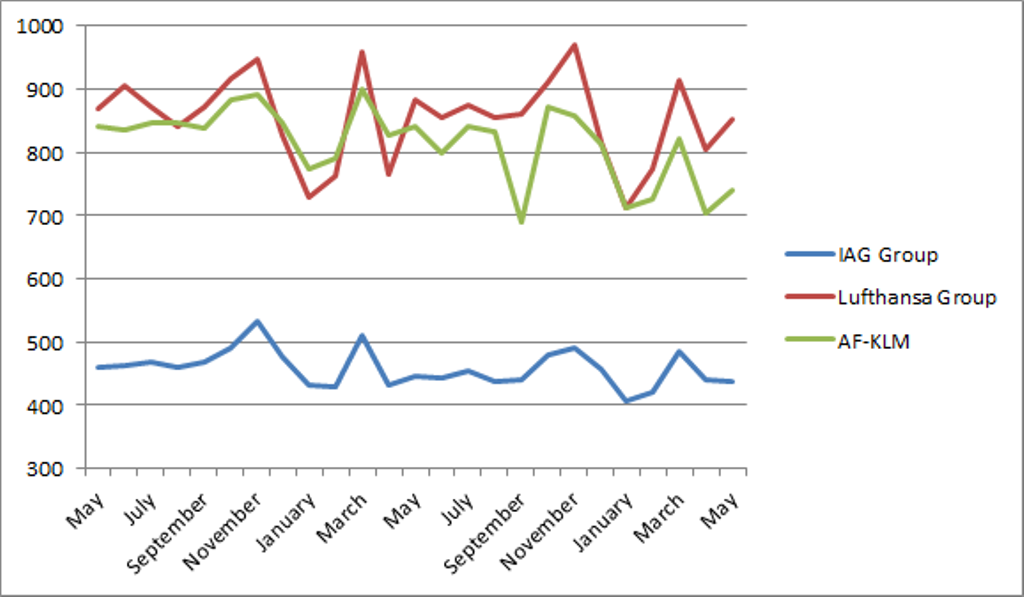 The latest monthly traffic statistics from some of Europe’s leading cargo carriers have revealed the difficulty they faced in May in terms of volumes carried and load factors when compared to last year.
Carrier statistics reveal that of Air France-KLM, Lufthansa and IAG, the Franco-Dutch carrier suffered the biggest percentage decline in demand during the month, with revenue tonne km sliding by 11.9% year on year to 741m RTK.
Meanwhile, the Lufthansa Group recorded a 3.4% decline in revenue cargo tonne km in May compared with last year to 852m RCTK, and IAG witnessed a 2% year-on-year decline in cargo tonne km to 437m CTK.
The results for the year-to-date were a little better for AF KLM, with the carrier recording a 10.4% year-on-year decline for the first five months to 3.7bn RTK.
During the same five-month period, IAG slipped 2.6% on last year to 2.2bn CTK and Lufthansa saw a 1% decline to 4.1bn RCTK.
AF-KLM said its performance reflected the fact that there is an ongoing restructuring of its cargo services and that full-freighter capacity for May had been reduced by 25% compared with the same month last year.
The French carrier’s total capacity for May, in available tonne km terms, was 4.9% down on a year earlier.
The European economy also continues to stutter. In its latest monthly round-up, IATA warned that recent improvements in European business confidence have yet to be reflected in airfreight volumes.
Also, a firming-up of oil prices and the Euro has meant that positive momentum from the European Central Bank stimulus has faltered.
Demand (2013-2015): 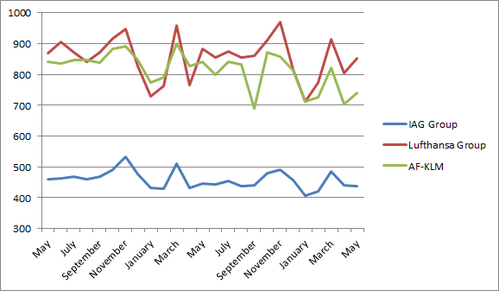 But while AF-KLM’s volumes suffered during the month, the steps it took to reduce its capacity helped to protect its load factor to some extent.
During the month, it recorded a load factor 59.4% compared with 64.2% a year ago, representing a 4.8 percentage point decline against last year.
However, its May load factor was a slight improvement on the April figure of 59.3%.
While Lufthansa’s demand figures did not slide by the same amount as those of AF-KLM, its decision to increase capacity in May compared with last year by 3.1% to 1.3bn available tonne km resulted in a similar decline in load factors, which declined by 4.4 percentage points to 64.5%.
Worryingly for the carriers, the year-on-year decline in load factors during May was not a one-off: their average monthly load factors for the first five months are behind the levels they recorded a year earlier.
load factors (2013-2015): 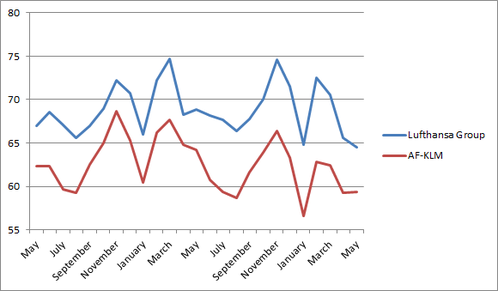 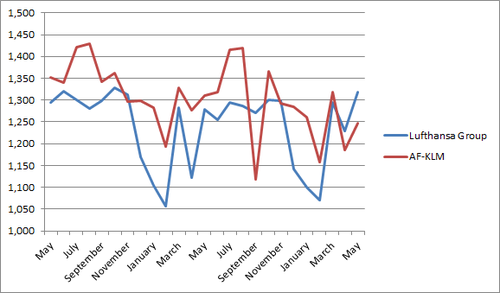